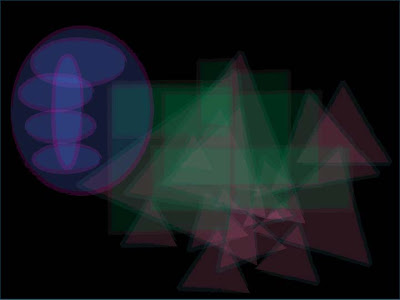 Hey, all. It's three-thirty in the morning, and I'm kinda stuck for something to do while my back gets into a fit state to return to bed. I realized that I've been neglecting the old blog. I do have a number of ideas for posts, but they're all fairly heavy essays, ones which would require my actually thinking about them ahead of time, possibly even giving them a second draft before posting.

Thing is, is that lately I've been fixated on the novel. I'm somewhere in the neighborhood of a quarter of the way through this draft, and honestly? I'm doing what feels like the best writing of my life. It's certainly a distinct step up from the last version. What I learned at Taos Toolbox is paying off, big time.

It's having an interesting second effect as well. Because my work is better, all of a sudden a whole different class of flaws has become apparent -- and by addressing them, there's another level of improvement. This is why I love the arts. I'm a damned good prose stylist, and I have a hell of a lot of room for improvement. What more could you ask for?

I was initially worried that I was hurting the novel or, on some ridiculous level, selling out by making the decision to write it as commercial fiction. Instead, I'm finding that a) this shit is to weird to be domesticated, and b) working within a conventional form has clarified the material in ways I'd never expected.

People who have been reading the same passage over and over for years now are actually fucking reading the damned passage. One person just realized the lead character is mentally ill, another that he's an artist -- that kind of thing.

By pruning away everything that does not contribute to the story in a substantial fashion, it forces the reader to take everything in much more conscientiously. My continual struggle to pare down my prose helps with this as well.

One of the main reasons things are working better this time around is because of something that I learned at Taos. I didn't learn it from the teachers; rather, I learned it when there was a particular critique I think I delivered at least once a day and usually two or three times.

"If your plot depends on an imaginary situation, tell us the fucking rules of the situation as soon as possible."

I realized that there was a difference between systematically constructing a world for the reader and being parsimonious with the fucking facts. Then we were given a lesson that cast another light on the situation, and I realized something.

You plot with tension not by withholding information from the reader, but by giving them information as fast as you gracefully can, in the proper order.

So when I started thinking in those terms, on returning to the novel I became aware that certain crucial areas in the story were almost fucking nonexistent. Because I used those moments as opportunities to introduce mystery. By writing fancy.

So now I'm using every opportunity to give the reader more information about the world, about the characters. I'm looking for the areas where I've got deadwood that's been sitting there for years -- just had a good four, five pages worth pointed out to me last night.

One last thing about plot before I go. I wasn't plotting incorrectly before. I was doing good things. I just hadn't done enough of them. While there were some very specific things I learned about plotting at Taos, the most important were techniques for working harder and more effectively at the task.

Over and over again, this is what I find in the arts. Techniques are good and important and a serious artist pays serious attention to their toolbox.

Nothing is as important as hard work.
Posted by Sean Craven at 3:46 AM No comments: