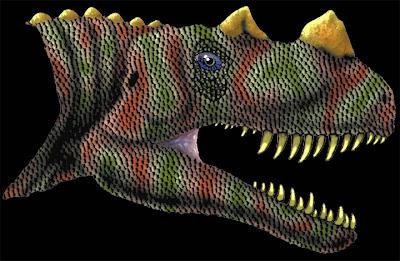 The best drawing I ever did was based on the same sketch I used for this. It was a scale-by-scale life-sized rendering done in graphite, ink, and Prismacolor. But because of its size I had to work standing up and my back had me bedridden twice by the time the neck was done. I wound up having to stop work on the damned thing just as I was getting to the fun part...
And now it's time to break out the hatchet. This is all based on the last episode I saw, one featuring a fight between Gastonia and Utahraptor -- I can't give you the species names because they didn't give them to the audience.

Here's the idea behind Jurassic Fight Club. Fossil evidence of dinosaur fights are analyzed by paleontologists and a computer-animated version of the fight is created. I've read that the fight scenes were done before the paleontologists were interviewed; that may be slander but that's how it seems when you watch the show.

The name is deceptive; very little of the show has been set in the Jurassic and it's not so much Fight Club as it is CSI. My first real criticism is that the show would be better if it filled a half-hour rather than an hour-long slot. There is too much repetition of thoughts and footage badly concealed by quick cutting -- the result is an onslaught of words and images that don't carry a whole lot of meaning.

Now, on to the previously stated criteria.

How much dinosaur do we get?

Not as much as I like -- the show is mostly interviews and field shots and so on, interspersed with clips from the final fight. And it didn't seem as though the final viewing of the fight was complete.

Do I get any new information?

As a matter of fact, yes. Gastonia is a lot more of a bad-ass than I thought. In particular the idea that some of the spikes/plates/scutes (sic) at the base of the tail could act as scissors is a fascinating one -- I'm not entirely convinced that they worked the way they show here, though. And it's always interesting to hear the story behind a fossil find.

How often does the show make me want to/actually scream?

First off is that science is treated quite badly here. Ideas ranging from solid speculation to flat-out whimsy are presented as facts. "Utahraptor could jump up to fifteen feet." We're talking about an animal the size of a bear here. Show me the biomechanics, tell me who argues this position and why -- and include a little room for doubt. Every conclusion is treated as fact; fuck that.

And the actual writing is terrible. Not like that's unusual in nature shows... Lines like "One hundred and twenty million years ago dinosaurs were the planet's dominant species," are just plain stupid. There is no such thing as the species 'dinosaur' and what's a dominant species anyway? Make sense or shut up, he said.

"Dinosaur" George Blasing seems as though he's a nice guy -- but he comes off as an enthusiast with no real rigor of thought. He's the main one throwing off unsupported and in many cases unsupportable assumptions and treating them like facts. I can't for the life of me understand why he gets so much face time.

The quick-cut technique they use here produces some bad results as well. For example, when Jim Kirkland is talking about ankylosaurs they cut to a shot of some stegosaurs. When Utahroptor is compared in size to a bear, they cut to footage of bears that don't have any scale, that don't give you an idea of their size. Why do this?

And it has to be said that there is no longer an acceptable excuse for showing Maniraptorans without feathers. If you can't afford to animate them then don't use them, dipshit. And they also got the hands wrong -- they were held in a position that's long since been discredited. Please make use of current knowledge!

Those aren't the only things that are just plain wrong. For instance, there's a claim that Utahraptor is more agile than Gastonia because it's a two-legged animal. Tell it to the wolves and cheetahs and antelope. Or the statement that fossils have no remains of organic matter in them. That's not what I've heard...

Kindly fact check when you're making documentaries. That would seem obvious, wouldn't it?

And finally, I'm not sure what to make of the sight of paleontologists entering states of full-on gooberosity in the public view. Watching people whose work I've read with pleasure going on about how bad-ass the dinosaurs are makes them seem, um... A little juvenile? I mean, I'm totally in favor of that kind of enthusiasm but the way it's used in the context of the show...

Look, if it gets to the point where I'm saying get a little dignity, well, that's just not a good sign.

Do we have any good visual moments? Do we recieve a frisson of the alien?

Yes, we do. The shots of Gastonia moving across the landscape with a group of pterosaurs mounted on its back are quite lovely and evocative.

Disappointing this time around. The fight was poorly thought out -- Utahraptor seems to have deliberately put himself into the aforementioned bone-shears of the Gastonia. It's just a lot of jumping around shot like a sneaker commercial or music video.

And just between you, me, and my schadenfruede I would have liked some more gore. I mean, don't tease me with your parental warnings if you ain't gonna dish out the blood in gratifying quantities.

Okay, I can hear you saying. How would you have done it differently, Mr. Big Mouth?

(As an utter aside. I took a peek at the post I made when my fever was peaking and found that I was channeling Myles naGopaleen... I suppose I could have stolen from worse.)
Posted by Sean Craven at 8:30 AM

Dinosaur George gets soo much face time because he is the producer and the only reason the show is even on, unfortunately as we have seen he is not a paleontologist, but in fact just a rich enthusiast.

I have stopped watching the show because I like my coffee table and my head and would rather not bust either...I will however watch the show when the episode with Panthera atrox (American Lion)and Arctodus simis (Giant Short-faced Bear) duke-it-out because my advisor, Blaine Schubert, is going to be on it...

So 'Dinosaur' George is the producer.

Grrreat. Another potential employer alienated. Maybe I should go back and do a little editing, make a few more personal remarks. Maybe develop the profanity a little bit.

I understand your decision to stop watching the show. I suppose my fondness for repetitive bitching is a motivation to keep following it...

So 'Dinosaur' George is the producer.

Grrreat. Another potential employer alienated. Maybe I should go back and do a little editing, make a few more personal remarks. Maybe develop the profanity a little bit.

I understand your decision to stop watching the show. I suppose my fondness for repetitive bitching is a motivation to keep following it...

Gastonia burgei (wow, Wikipedia is so hard to find, History Channel) was not using its lateral tail spines as scissors. That's the most lame-brained idea for ankylosaur scutes I've ever heard. The scutes are dorsoventrally compressed, yes, but their edges were not CUTTING SURFACES.

You're totally right--if you can't afford, either by time or money, to give maniraptors feathers, don't bother including them.

And why are we doing Gasonia vs. Utahraptor? Why not do a historically significant fight, like Protoceratops vs. Velociraptor? They could have made a comparison between the little horned dinosaur's beak and that of a parrot, then cut to a shot of a cockatoo. It would've been lovely.

I would like to express appreciation to you just for bailing me out of this particular difficulty. As a result of looking out throughout the internet and seeing notions that were not beneficial, I was thinking my entire life was over. Being alive devoid of the answers to the issues you have solved by means of the guide is a serious case, as well as those that might have badly damaged my career if I hadn’t noticed the blog. The know-how and kindness in controlling all the things was very helpful. I am not sure what I would’ve done if I had not discovered such a subject like this. It’s possible to at this time look forward to my future. Thanks for your time very much for your professional and sensible guide. I won’t think twice to propose your web blog to any person who requires counselling about this subject. visit here – alternative medicine cam buse