A Revelation In The Early Morning. 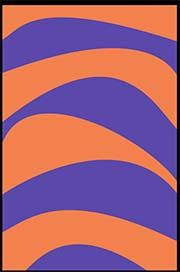 The digital drawing assignment mentioned below involved doing a set of color exercises. When I was done I liked most of them but three were just not strong enough for me to want to print them. Here they are. This one makes me think of either Shaggy from the Scooby Doo cartoons or artificial fruit flavoring.

So I was up in the middle of the night as usual and I was hit by an inspiration as I examined my most recent work for my digital drawing class. I liked it. I was thinking about printing it. I wanted to see these compositions at a large size -- and that's the benefit of Illustrator. I designed eight of these compositions on a letter-sized space and I can print them at any size I want.

But the idea of turning out a series of eight prints based on the work of a few days seemed a little odd to me. If I was going to try and market these as prints... Hmmm. My intuition told me that I just wasn't working hard enough to make these worthwhile art pieces.

The process of generating a print digitally, then printing it digitally seems too easy. What would make the print seem as though it were a real artifact, not something just rolling out of a machine as a standardized unit of production? 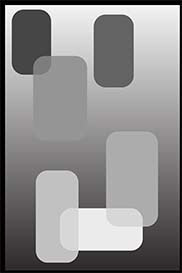 These, on the other hand, are unremittingly drab and were clearly done to get the monochrome composition out of the way fast. Next!
And then it dawned on me. Someone in class had printed onto mylar, then mounted the transparency on a piece of textured paper. I thought about Ruth Leaf's prints and how much attention she paid to the paper, to texture -- to the print not simply as image but also as object.

Perhaps this is one of the key differences between the artist and the illustrator. I am going to explore the idea that making the digital print is only one step in the production of an art piece. I want to find ways of using constructive techniques to create artworks using my images rather than simply printing them.

I'm going to start talking to the people in the print lab about printing on paper other than that provided in the lab. This will involve treating the paper with an emulsion that will accept the ink. For now I want to print on some nice Japanese print paper with plenty of foreign objects and irregularities, nose around and see what else is out there. 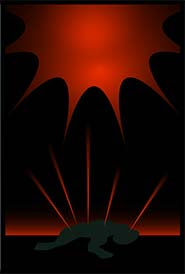 The assignment here was to depict an emotional state using color. Could anything be more obvious? More clumsy? More maudlin? The van-art gradients aren't helping.
But that's just the start of a possible avenue of exploration. I could decoupage my work onto plywood or chipboard. I could create multilayered shadow boxes. I want to learn about papermaking and bookbinding. I need to find out more, think more about what can be done, physically, with printed images.

Hmmmmmmmmmm.
Posted by Sean Craven at 9:29 AM