Thoughts On Genre 1: What The Hell Is It, And Where Did It Come From? 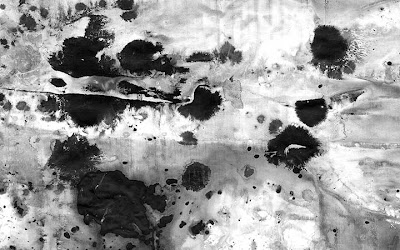 And thusly I have gone from this to this. 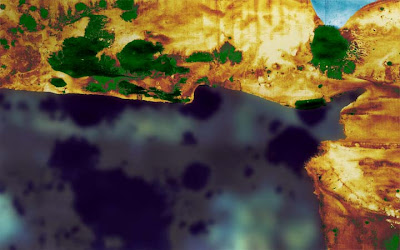 I've decided to take the blur off of the lake -- thank goodness for smart filters -- but it really doesn't look this tacky at full size. Now I need to go start work on a Psitticosaurus.
Rob Pierce, writer and publisher/editor of the purchasable magazine Swill, made a comment on yesterday's post. It was full of fire and defiance and one of the key statements in it was this:

The whole idea of "genre" fiction is some snob's categorization anyway. Dostoevski wrote about crime. Kafka wrote fantasy. Shakespeare wrote romance, crime and fantasy, a noirist for his time. Then someone with credentials decided only certain types of stories were "literary" and everything else was "genre." Oh, unless the fantasy can be retagged as something like "magical realism."

You might want to go read the whole thing.

Anyway, there's a lot that I agree with here -- but the central premise is not one of them.

Before I throw myself into the fire, let me say that many fans of Latin American magic realism might be surprised to find out that North America and Britain have strong literary traditions that both foreshadow and influence their favorite reading -- names like John Collier and Fritz Leiber and a number of others I'll mention later spring to mind. The stories published in Unknown Worlds magazine would please them -- if they were to hold their noses and creep into the science fiction section of the bookstore.

That's actually a good illustration of what I hate about genre, and what I think Rob was speaking against -- when it turns into the equivalent of a caste system, where it's possible to dismiss or diminish a work by slapping a label on it rather than actually reading it. I've said any number of times that given the amount of romance fiction published the odds are pretty good that there's work being done in the field that I'd love that I'll never find out about just because I'm not going to go looking for it.

(I should revise that last sentence; instead, it shall stand as a grim monument to a moment's lapse of genius.)

But genre exists in the minds of readers, in literary tradition, at conventions and on the shelves of bookstores. It is one of the dominant influences on modern fiction. And I think it's worth examining. Genuine scholars of literature would not doubt disagree with me on many points; kindly correct me when I'm wrong.

Let's start with the history and origins of genre fiction. Which means thinking about literary tradition in general, because that is what a genre is -- a literary tradition, a set of forms familiar to both the writer and her intended audience.

Now since most writers working in most times were the products of cultures that believed in the supernatural, most written works predating the industrial revolution have some element of the fantastic to them. Does this make them fantasy? Not as I'm defining it here. (It does mean that a smart fantasist has some knowledge of folklore and religious writing.)

The traditions of genre as I understand them go back to the nineteenth century. The works of a number of authors, including Edgar Allen Poe, H.G. Wells, and Jules Verne, provided the templates of what would later become a variety of different genres. Poe in particular gave us the essential forms of much of the short fiction to follow -- he wrote what now seem to be detective stories, horror stories, and science fiction.

But at that point in time they were not labeled as such. They were just fiction.

The label is one of four elements which define a genre. The other three are a self-identified readership and a market to serve them, a set of traditional forms, and a body of jargon that applies specifically to works regarded as being of that genre.

And there seems to be one man who is responsible for all these things -- Hugo Gernsback. He was an inventor and radio engineer who decided to start a magazine called Amazing Stories devoted to fiction that contained scientific elements.

Right from the beginning there was a clubhouse atmosphere to what was to become science fiction. The letters columns of his magazine allowed its readers to network -- guess where this led -- and they began to publish their own small magazines.

The market's demand for stories to fit into these niches led to the development of traditional forms and formulas which allowed writers to quickly produce works that would satisfy their specialized audiences.

And a lot of them don't read anything else. Harlequin romance readers can plow through two or three of those things in a day -- and they do. There are a lot of folks whose commute is made bearable by the latest S Is For Sequel mystery.

And this is the source of my own distaste for much genre fiction -- it is product, created to scratch a certain itch. The good writers doing this kind of work have that itch themselves and scratch it well and honestly. But to write and read the same thing over and over again...

To my mind, that's like saying, "I'm eating frosting from now on." I have no interest in a frosting diet -- but I will say that this kind of market constraint can produce some damned interesting frosting.

But it also produces a lot of nasty frosting. And that's how genre fiction earned its bad reputation -- the vast majority of work produced to fulfill the needs of a genre market is horrible.

While fiction with these kind of themes has always been published in the more mainstream and literary markets, after a certain point (Did it happen in the twenties? The thirties?) genre congealed -- and if you published a story that featured these themes it was regarded as being part of a genre and thus a second-class piece of fiction. And much of the time this judgment is accurate -- to the detriment of many writers working inside of genres and the wider readership who would appreciate their work if it was made visible outside the genre.

As the tropes and formulas of these genres became more clearly defined a body of language grew to describe them. The arcane language describing exactly how explicit the sex is in a given romance novel, 'cozy' versus 'hard boiled' versus 'police procedural' mysteries... And in science fiction the jargon has moved inside of the fiction, giving us 'blasters' and 'hyperspace' and so on.

So now I've defined genre for the purposes of this discussion. Next time I'll talk about how literature fits into this -- and how literary fiction became a genre every bit as restrictive as Spicy Western Air Romance. Let me give you a hint -- it involves a label, a self-identified readership and a market to serve them, a set of traditional forms, and a body of jargon.
Posted by Sean Craven at 8:07 AM