Back To The Writing, Oafboy 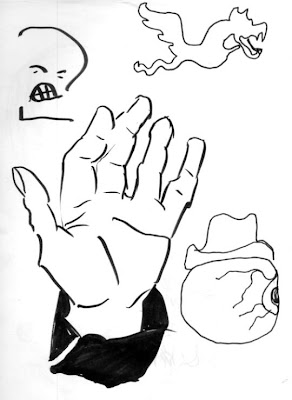 You know, this whole post-the-sketches thing is cramping my style -- but it's a style that needs to be cramped.
So I've been arting my brains out lately -- I just delivered my submission for the Gualala show last night (the reception is five to seven this Saturday, love to see you there) -- and I am so ready to get back to some serious writing.

I dunno. I've been feeling a bit... Well, I've been thinking. And you know that never turns out well.

During a brief rest period I recently leafed through the first two volumes of the Clarion anthology and had an odd reaction. This anthology came out of the Clarion workshop, a legendary writer's writer's workshop devoted to fantastic fiction. A teacher of mine once said that in terms of producing published writers it was the most successful workshop ever conducted. Sure looks that way to me.

I tried to get into Clarion a couple of years back and totally stepped on my dick in the application process. I sent 'em material with almost no fantastic elements in it and at the last minute I reformatted the manuscript without checking the page count. I did get a nice "very strong writing, we encourage you to persist" note but I didn't get in. And now that my back's worse, the six weeks that Clarion lasts may well be beyond my physical capacity.

Anyway, while the fiction in the anthologies didn't particularly thrill me I found myself getting all het up by the essays written by the instructors and I said to myself, "Time to step up the game, oafboy. You need to take your writing to the next level." For some reason this thought didn't have its usual crippling effect. I think it's because I was so fucking busy with art stuff that I didn't have time for extraneous self-torture.

It was just a while after that I ran across a post on Eat Our Brains (see the blogroll in the sidebar) and read a post announcing that another writer's workshop was taking applications. It's called Viable Paradise, it was to some extent inspired by Clarion, and it's only a week long. I can handle a week, right?

So now I'm trying to gear up to apply. I want to do it right but I don't want to have my heart set on it. I want to get it out of the way, get on with my life, and if it happens, good.

The way it works is that you submit with one or two stories, total of about 8,000 words. That's not much for me -- I'm a long-winded bastard if nothing else. The stories or novel-selection that you submit will be what gets workshopped over the course of the next week.

So there's something to think about. I need something that's good enough to get me in -- but not so good that it won't benefit from the workshopping. I have such a story. It's been published in Monday Night Magazine (again, see sidebar) but it's one that frustrates me because it has some of my best work in it and yet it fails. And I think the problem is that it needs to be more science-fictiony.

It's about 5,500 words long. I need another story to cap off the submission and I have nothing in that length.

Since the main piece is one that skates along in-between mainstream fiction and SF, I want something that's straight-up balls-out genre work, the kind of thing that would drive the people in my writer's group nuts. Since the other story is pretty gentle in nature, I want some action. Thusly, I ponder.

And I also have another story I wanna write. I've figured out a way into the racoon story, the one that made me give up on my bar series. But that's going to be much too long for the submission, so that gets done second.

Finally, it's about time to get back into the novel. I'm so anxious to start cutting into it that I feel like I've gotta pee. (Huh -- I do have to pee.) I'm going to hear back from another reader next Wednesday but so far all the reports have been encouraging.

One step at a time, though. First comes the short story. Since I had such a blast liveblogging the Psittacosaurus piece, maybe I'll do something similar with the story,