So How's The Novel Doing? 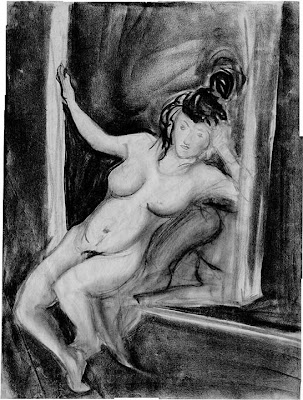 Another of my late-period nudes. When I first began studying drawing, I went through three consecutive semesters of life-drawing. I got to the point where I was pretty good -- I've done a number of drawings that have been mistaken for photographs and most of them came from that period.

I don't have any of those. One night when the missus and I were just friends, I brought a portfolio of my best drawings over to show to her, since she was my pal the sculptor. On the way home I waited for a bus with my portfolio leaning against the sign pole. When the bus came I went to grab it and it wasn't there.

Anyway, since then I haven't put in the sheer time necessary to do really accurate life drawings, and as a result I hated what little life drawing I did. But now I'm looking back at this stuff and, as in yesterday's piece, the keyword for me is charming. Yes, it's badly lacking in accurate anatomy and the niceties of observation. But now I think there's something really sweet about it.

This one was particularly embarrassing for me to draw because it fairly clearly shows that I found the model attractive. I've always had an easy time drawing women who didn't have a particular appeal for me, especially your lean dancer/gymnast types. I've felt as if there's something wrong about drawing a woman you find attractive...

The reason for this is that I'm powering through my last draft by myself, then submitting that to the writer's groups, then doing a further revision based on the criticisms I receive.

The Monday night group should be starting up any minute now; I can hardly wait. They'll take forty pages a week -- and I'm gonna be a sleaze and make those pages eleven-point type. I've been taking that from Al for years. Now I shall have my revenge.

The Homework Club, on the other hand, has a fifteen-page maximum. So it's pretty much one, maybe two chapters a week. Which will drive me nuts, but these guys are pros.

There's something weird happening in the Homework Club, though. It's as though we've hit some kind of critical mass and all of a sudden it seems as if all of us are moving up to the next level. I'm seeing it in the edits and the work that the others are submitting and I'm feeling it in my own writing process.

It's interesting. Up until now I've regarded the process of revision as one of perfecting the work. Now this is a subtle difference but an important one -- now I feel as if my job is to prepare the work for the reader.

For instance, I've mentioned that I try and fully experience the scenes I write in as many senses as possible, and then describe it in writing. Previously I would have worked hard to bring those visions to the page as completely as possible. Now I find myself throwing out one beautiful detail after another because they are of no use to the reader. If it doesn't help the reader get the story, it doesn't belong on the page.

It's amazing, the amount of verbiage needed to lubricate an ideas passage from thought to prose. Getting rid of those words feels great.

Up until now, my revisions have always added material -- because my problem was incompleteness. But the story of the novel is now complete. So now revision is partially a matter of trimming the excess. I'm losing one page in twenty or so. Probably a bit more than that.

And by working on more than one part of the novel at the same time, I'm finding that I can hold the whole thing in my head, which allows me to find places where information is duplicated, places where hints should be dropped, etc.

I'm also realizing that what I'm doing stems very directly from my experiences writing short fiction and scripts. I've learned techniques of compression from writing short fiction -- say what you will about my stuff, it's typically very, very conceptually dense. And scripts have taught me clarity -- when you write a script, it's part of someone's job and you're doing everyone a favor if you make it fucking difficult to misunderstand.

The result is something that is both rich in information and easy to read. Which pleases me no end.

What's really exciting is that as each chapter goes by, I think to myself, "And this is where it really kicks in." It is far from a pure action novel -- the lead character doesn't get into a fight until more than a third of the way through the book and he spends two chapters in the hospital as a result of that fight -- but the plot keeps twisting and going deeper. The excitement builds continuously.

It doesn't have a narrative arc -- it's a right triangle, straight up forty-five degrees from the base to the apex. There was a while where it was like a hammock, tight at the ends and saggy in the middle. No more; you could launch a rocket off this thing.

I go through phases of thinking it's just a hack fantasy/horror novel, but that's not true. It's focused more strongly on prose and character than anything else -- it's just that those characters live in a fantastic world. No good guys, no bad guys, just people who succeed and fail at being able to live with one another and themselves. Yeah, it has the same story bones underlying it as every other fiction -- but I think it's something that hasn't been seen before.

Despite its mainstream/literary qualities, its focus on social realism and convincing pictures of mental illness, drug use, and the life of the artist, I'm bringing in everything from After Man-style speculative evolution, surrealism, quest fantasy, comic-book superpowers, a view of the afterlife that's intended to be convincing enough to support a cult, a haunted house story, and genuinely visionary moments -- and everything latches together, flows smoothly, and makes perfect sense in context.

I'm feeling pretty proud right now. But don't worry. Give me another month or two and I'll be back to excoriating myself for my creative inadequacies.

Email ThisBlogThis!Share to TwitterShare to FacebookShare to Pinterest
Labels: The Ghost Rockers, The Songs Of Stray Souls, writing

Agreed. Homework Club has gone from Sweatin' to the Oldies to Pilates Intensive. And trust me when I say that shit ain't easy.

I swear there is something going on. Rob, Warren, you, and I...

There is something going on.