Ten-In-One Part One: My Pal The Aggressively Gay White Supremacist With Supplemental Dentation 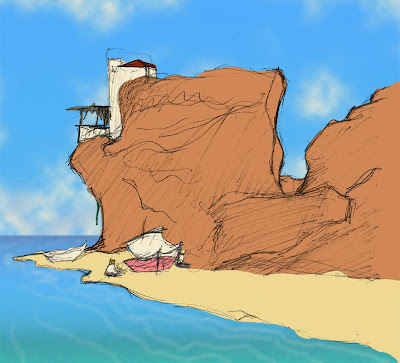 Just for giggles I threw some chee-z color down under the sketch I posted yesterday. After all, if I post without an image the Earth will be thrown out of orbit and spiral into the sun.

But I've been working so hard that I've ignored the blog for a little while now. How about a real post, something amusing -- a set of brief glimpses into my past. Now from time to time you'll hear the phrase 'weirdness magnet.' I am here to assure you that the phenomenon is real, and I will offer you four stories from my life that suggest that I'm a grade-A weirdness magnet.

Anyone with the tiniest smidgen of critical acumen knows that even the cleverest lyrics for popular music are not fucking poetry. They almost never read well on the page. So the following is gonna come off a little dorky... Here are the lyrics for one of the songs we did for The Dizzy Toilet Devil's first album. It's one of the few untainted by our departed asshole guitarist, but alas -- Bile Langschodt is too embarassed by his vocals to let me post an MP3... Anyway.

(Chorus)
Why is my life such a goddamned freak show?
Why do these people want to talk to me?
There's an attraction normal folks can never know
I'm marked in a way that normal people can't see

She walks right up to me on the street
she ought to be black but she's oozy and pink
she says, "Do you believe in morticians?
They fuck corpses, boy, what do you think?"

(Chorus)
A sweet young woman sits right down beside me
she's holding her bundled up pride and joy
the baby starts to play with the hair on my leg
I see his little baby hands, the kid is a lobster boy

First Verse
I'll always think of this dude as the aggresively gay white supremacist with supplemental dentation. (I can find a box to put anyone in.) It's funny -- I went through my teen years and early twenties assuming that if a guy hit on me in a serious fashion I'd probably freak out, but it turned out not to be the case.

In my mid-twenties I found out that serious exercise gets you high and leaves you tired enough to sleep, so I got hooked on the gym. I got to the point where I was having to add weights to the Universal and Nautilii.

(I should have switched to free weights but I didn't want to have fucking anything to do with the ex-cons and steroid freaks who do occupied that part of the gym. They were radioactive with assholery, and it would have just been a matter of time before some gland-munching juice freak pissed me off and I'd have gotten my head torn off in the ensuing scuffle.)

What I'm saying is that there was an extended period in my life where I was an impressive physical specimen. Gay guys started hitting on me on a semi-regular basis. Most of the time I didn't even notice because I am pathetically sexually naive...

Honestly, I think about this and I imagine how I would have felt about these situations if I hadn't been a comfortably violence-positive behemoth. I don't know why women aren't shooting guys left and fucking right, I swear to god.

(Interestingly, the two women who used those kinds of unsubtle tactics got me. Hell, one of them still has me.)

I was riding on Golden Gate transit, going from school in Santa Rosa to my girlfriend's house in San Francisco (I caught the bus outside school and it took me right to the foot of the hill her house was on. There were some weird fate issues in that relationship...) and this dude comes up and sits next to me and initiates a converation.

As he talks, he keeps slipping his arm up around my shoulders. I listen, I talk, and I patiently keep taking his arm off of my shoulders. Over and over again. I don't know why I didn't get pissed off -- I suspect it was because I didn't feel even vaguely threatened.

(Actually, it was because being openly and violently hated at school and alternately touch-starved and beaten at home has left me with the funkiest old set of personal boundaries. I accept stuff I hate and flee stuff I like. And have a desperate thirst for attention, as you may have noticed. But that's a whole other can of slimy disgusting worms... and I'm a lot better now.)

There was something weird about his speech, a slight slur that I'd never heard before. He asks me what my ethnicity is...

"Pretty much your standard white trash. We've been in the US since the pilgrims hit dirt and we still don't have any money."

And he gets pissed.

"I hate that... that... Saying white trash is racist! (I agree with him but as white trash I get to say it and fuck you.) I once went to this store down in Los Angeles that this colored (!) couple ran called Poor White Trash and it was filled with all these horrible statuettes and framed cartoons making fun of white people and they thought it was funny! I hate it when black people have an attitude!"

So at that point he must have seen something in my face because he got sheepish and apologetic.

"Listen, I'm no racist. I like colored people when they know their place. I mean, I had a black lover when I lived in the South."

Oh, brother. I don't think I've ever run across a finer specimen of a self-damning protestation of innocence. I wanted to mount it and hang it over the fireplace.

Anyway, that's when I get a look at the inside of his mouth. He had two rows of teeth! Man, that dude was quite a cake in the first place but that was some intense frosting. It looked as if he had a baby-sized extra jaw nestled inside the regular one. And for the rest of the ride I couldn't keep my eyes off of his choppers.

I remember thinking to myself, "Pay attention to this guy -- he'll teach you a lesson about humans you will get nowhere else."

This ran a little longer than I expected. Cool -- I'll get four posts out of this idea.

So tomorrow I'll tell you all about the diseased corpse-fucker lady who actually got this song rolling.
Posted by Sean Craven at 7:00 AM

Dont care about the colour when it feels right

I kinda like the way it turned out. It's got a nice summer feel to it.