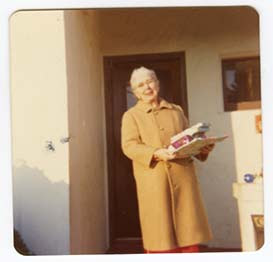 So I'm in the process of revising a short story for purposes I ain't gonna tell you about. It's one of the two stories that I submitted to Viable Paradise. The original ending had to be ditched, it's still got some virtues and it hangs together fairly well on its own. Here's a brief glimpse of me and my Grandma Jean, back when we lived together. And yeah, this really happened. I was twenty-three, she was in her eighties... I miss her. I miss her a lot.

The previous Sunday Grandma decided to take me to the city, down the highway that cut through the salt marshes. There was a white hill of salt on the horizon and all the cars had their headlights on.

“I hope you stay,” I said. “I don’t want you to go. But that’s me being selfish. Honestly, if I were in your shoes I wouldn’t think about it for a minute. Just imagine what kind of wildlife they’ve got out there, what it’s like to see things from space…”

I nodded. “Uh, huh.” I felt something shift inside and opened my window for safety’s sake. There was a moment of silence.

“You know, you’re right,” Grandma said. “This isn’t the kind of opportunity you can turn down.” She turned to me, smiling. “I’ll go and you’ll be fine, won’t you?”

“Good,” Grandma said. “That’s good.” The next few miles went by in silence. “So Amy sent you another letter.”

“Yeah,” I said and discreetly emitted a little gas from Saturday’s drinking binge. “I can’t believe what she wrote. She said ‘I know I’m causing you great pain but I don’t think it would be appropriate for me to change my behavior in order to accommodate your needs.’” I could see the sentence laid out in the beautiful little calligraphic loops of Amy’s handwriting. My throat hurt. “I mean, isn’t that what courtesy is? Not deliberately hurting people? And she’s upset because I don’t appreciate the tender romance she’s picked up since she left to go to school and then she asks me to write her more often. I thought we were going to be forever. I’m like a bug on a pin. God, I’m an idiot.”

There was no way I could explain beer farts to her. I couldn’t even say the words in her presence.

After a few moments Grandma broke the silence. “This isn’t the end of the world, you know.”

“Listen,” she said in a tone of flat anger that I’d never heard before. “When I was your age I fell in love with a young man. He was a pilot and that was when pilots were something new, when they were heroes.” I could hear her voice warm at the memory. “He had a mustache and he was… Oh. I loved him so much and when the war came he went to England to volunteer in the RAF. That’s when my hair went white. When I heard that he’d died. After that I let your grandfather marry me.”

“That’s what life is like,” Grandma said. “Everything good goes away and you feel sad and angry and it never stops. All you can do is be nice. That’s all there is.”

I felt a sensation of pressure. The world constricted around me like shrink wrap around a box, airtight and closing in. I squirmed in my seat and looked out at the salt flats, the rushes emerging from the brown water in bunches, the red-winged blackbirds and ducks and egrets. I stifled in the brimstone stink that filled the car. Grandma wasn’t supposed to be like me.

She thought God was love.

Hey, I LIKED that ending. Looking forward to however yr pulling the story together. This story's turning into an old pal.

Expect the new version sometime next week. I received one complaint about the story as it stands from one of my instructors at VP -- she said it didn't have a plot, since it wasn't driven by the protagonist's needs and decisions.

That made me realize that it was actually a New Yorker-style epiphany story, so I went back and put a little more effort into building toward the epiphany. Hopefully that helped...