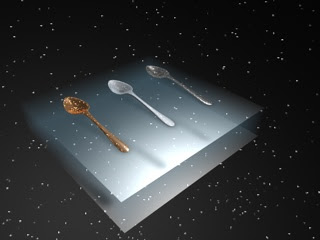 My first venture into the exciting world of hypernurbs. When Galactus throws a teaparty...
So I'm probably not going to be doing a lot of blogging this next week. I'm off to attend the Viable Paradise writer's workshop on Martha's Vineyard. Seven pro writers and editors, twenty-seven other neophyte writers, and me.

Due to a combination of class deadlines and general paralysis, I am nowhere near as prepared as I would have liked to have been. My query letter is flabby, I have no synopsis, my outlines need work... but fuckit. They aren't expecting me to spring the damned novel on them anyway.

I am frightened of the trip, I'm looking forward to the workshop. It'll all be fine. I'm certain that once I'm actually in the process I'll feel great. It's the anticipation that's killing me.

So now I have to cut my hair, then head downtown and have a copy of the current draft of the novel spiral-bound.

I'll do one set of edits on it on the flight in, then go over it again on the flight home, then do at least two chapters of revision a day until it's all done. At that point it'll just be a matter of sending it through Homework Club for the final polish.

And at that point I'll be working on the next volume with the Monday night krew. That's going to be tricky. I've finished the first volume, I have a solid outline of the third, but for the second all I have is a bunch of scenes that have already been written (yeah, I've written a couple of drafts of volume two already -- but things have changed so much that most of that work is going to be discarded), and a list of all the shit that needs to happen. I need to organize this into a real plot.

I suspect that what I learn at Viable Paradise will help me with that.
Posted by Sean Craven at 3:16 PM

Email ThisBlogThis!Share to TwitterShare to FacebookShare to Pinterest
Labels: The Ghost Rockers, The Songs Of Stray Souls, writing

Hey, Galactus just came up in conversation this morning. Of course, the guy who brought him up reminds me of you.

Good luck on Paradise, of course. Going by the mini-synopsis I saw for book 2, you'd better get that thing together - it sounds great.

Dude, I am so looking forward to rewriting the ending of volume two. I'm gonna rip out the reader's heart and stomp that sucker flat.

And hey, when we next meet, the whole gang will be there. I was talking to Warren about the possibility of making some satin gang jackets...

Good luck! Very cool. Looking forward to reading all about the retreat when you get back.