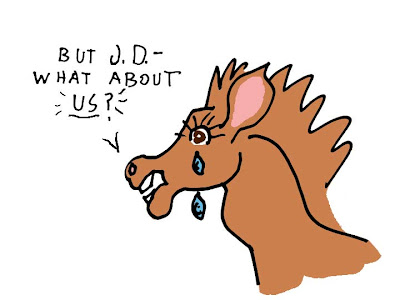 This one isn't my fault. Erin O'Brien twittered a link to the news story, and... Okay, it's her fault.
Okay. I'm going to make this fast, because I really should get to work. But I need to say this. Folks, we're on a slippery slope. Check this out.

Now, in this case the magnificently dildonic J.D. Hayworth is claiming that gay marriage is the first step on the road to state-sanctioned bestiality. It would be easy enough to refute his argument, as the slippery slope is one of the first things you learn about when you start studying logic and debate. Again, check it out. Slippery slope. When someone starts in with that kind of nonsense, they've removed themselves from the grownup's table.

The thing is, is that this fits in perfectly with my position on the subject of gay marriage, which is that marriage is a religious ceremony and the state has no fucking place involving itself in marriage in any way. Domestic partnerships? Yeah, there's room for legislation there, but marriage is part of folk culture.

If your church is opposed to gay marriage, then don't provide gay marriages and shut the fuck up. You are entitled to your pinheaded, dickish little game of make-believe, you are not entitled to cram it down anyone else's throat through abuse of the political process.

So in this case, I'm in with Hayworth. Because I have my own hate-filled agenda. I'm anti-horse.

(Stay with me. I promise this will all come together in the end.)

Well, I wouldn't say anti-horse. I mean, I'm not prejudiced. I once met a horse I liked, and he'll tell you that I'm not horsephobic.

But while I'm not a horse-hater, you have to admit that they're stupid, heirarchal, vicious, planet-destroying toys of the rich that crap all over the path.

Plus, I hear they're hella tasty. French fries in the fat from horse kidneys? I so want to try that. Horse salami? Oh, yeah.

Right now the laws in America are slanted heavily against the beautiful, sacred practice of hippophagia. And if, as Hayworth says, gay marriage will lead to horse marriage, things can only get worse.

Think of it this way. You marry a Shetland pony, right? And it's beautiful. You love each other. Your relationship is stable, you're part of the community, and everyone who sees you thinks, "That's what I want for myself and my horse-headed children."

So you take your beloved out for your fifth anniversary dinner. Flowers, candle-light, trough of champagne, the works.

And then when the menus come, there it is in the entree section. Fillet of Secretariat. Black Beauty with wild mushrooms. Braised shank of Seabiscuit in a reduced wine sauce. And you lift your head and meet the eyes of your spouse.

If people have to face this kind of thing, they are gonna be passing laws against eating horses right and fucking left.

But what Mr. Hayworth (And in what does he stick his weeny? I mean, why exactly did he go to horses here? Isn't there something suspicious about the way this is coming from someone named Hayworth? We need to look into this dude's behavior.) fails to mention is that the first step down that slippery slope took place when we allowed men and women to marry. Because that led to gay marriage. And that will lead to horse marriage.

( And if you think horse marriage is bad, you don't want to see what happens when we slide a little further down the slope. "Actually, he's not really into horses," said Sweet Chariot. "I'm just a beard.")

So if I'm ever going to have the chance to sit down to a nice platter of cheval au poivre with frites, we need to outlaw marriage.

I'm just thinking of the horses.
Posted by Sean Craven at 7:38 AM

I stick with my original premise. Hayworth gets a horse to say "I do" and I'm down with it.

And that's a beautiful thing -- but let's face it, you're a lover and I'm a hater.

In that spirit, I will make the following counter-offer. If Mr. Hayworth will enter into a serious relationship -- one that convincingly demonstrates love -- with a horse?

I can't promise I'll be able to do it convincingly, though.