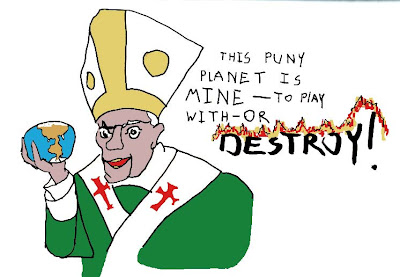 I know this shouldn't be funny. This is institutionalized abuse of an exceptionally vile and damaging nature. This is a world power run amok with no-one in authority being willing to step up and prosecute criminal charges.

But last night, I had a realization about this whole wretched situation that made me crack up.

The Pope is a supervillain!

He wears a costume. He has a made-up name. He claims to have superpowers, and many believe those claims. He is a former Nazi Youth who spearheaded a conspiracy intended to benefit child molesters, and that is just one of many crimes against humanity committed by his shadowy criminal organization. He plunders the third world to maintain a palace of grotesque luxury. He has a Popemobile! I mean, come on.

No-one I can think of in the history of the world has been so clearly, so unmistakeably, exactly the kind of supervillain that Batman or the Fantastic Four would fight. He's pretty much Doctor Doom, right down to having his own Latveria.

And if you're Catholic, and you find my opinions offensive? Don't think I've singled you out. I pretty much hate all religions, from Hinduism which encourages people to kill their children by bathing them in a river of shit to Islam, whose concept of an afterlife is grotesquely perverse, degrading, and sweatily juvenile, to the Evangelical Christianity that's turning the US into a theocracy run by and for ignorant jingoistic pinheads. I hate 'em all...

... but at least they aren't run by supervillains.
Posted by Sean Craven at 9:43 AM

Not only that, but he even looks the part!
http://aftermathnews.files.wordpress.com/2008/04/evil-pope.jpg

I'm just imagining a bunch of Cardinals sitting around, saying, "Well, there's some really ugly stuff coming down the pipes. Hey, you know what we need? A really evil pope."

And someone says, "I got the guy."

it is sadly true. though don't feel bad about laughing at your realization. as dawkins points out there is way way WAY too much leniency in this culture in regrad to "freedom of religion". to the point we put up with it actually raping our kids!

on a lighter note, i wish i could put on a cape and cowel and fight the guy... though me vs. him would be a dull fight. he is a zillion years old (though if he had the super powers he claims it could be more interesting). so i guess it be more me fighting various bishops to get to him... hmmm "THE bishop" of python canon as the main cronnie perhaps :P