Who Writes My Stuff 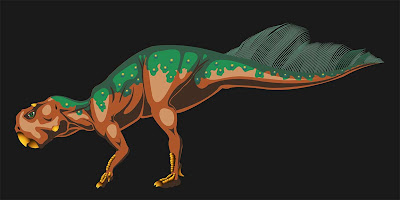 I just put up a small paleo-art gallery at Redbubble -- go ahead and take a look!

So Catherine Schaff-Stump posted a link to one of those hideous internet sell-your-soul-to-the-devil thingies. You'll have to check it out for yourself, but it's exactly the kind of brain candy I can't help but gobble down. You give it a chunk of text, it tells you who wrote it. I had to give it a shot; the results were interesting.

I began by feeding it the current first chapter of the novel, one scene at a time. The first scene involved a conversation between two friends, a man and a woman. It was supposedly written by Steven King. Look, I respect King, but he is not my god of prose. No flies on him, I read and enjoy much of his work and wish him well, but he's not the kind of writer that makes me wish I'd done what he'd done.

The next involved an encounter with a couple of street musicians and was written by Chuck Palahniuk. Fight Club is a movie I love way more than it deserves, okay? And Palahniuk has a reputation for being exactly the kind of writer I treasure. But I've read Choke and gotten halfway through Haunted and I just don't seem to like his work. I'll try more but... Palahniuk.

Huh. Okay, I can see my stuff on the shelf with those dudes. It does make a certain sense.

Next up? Jack London. Okay, I can see that fitting into a certain sorta polarity with King and Palahniuk. The next one is by Ian Fleming. I read Chitty-Chitty Bang-Bang as a child and enjoyed it; I read a James Bond novel and 007 was bound and spanked by someone named Blofeld. No, thank you. The last is by King again.

Then I run the whole chapter through the thing and it was written by Palahniuk. Okay. Right. Sentimental types, tough-ish, a tendency toward spare phrasing with regular decorations. I can see something to this.

So then I decide to try my published story, Tourists. You've read it, haven't you? If you haven't, go and fucking read it and come back.

Sorry about that, but unless you've read the story you won't get this. I mean, I busted my fucking ass on that story. I ripped my goddamned heart out for you people. And even if you don't like the stupid fucking thing, you've got to admit it's a rich mix -- everything from religious satire to sensitive observations of family relationships to science fiction horror embodying a critique of colonial appropriation of intellectual and cultural property and no, I am not shitting you on the last.

And who do you think wrote the damned story? Dan F.-is-for-Fucking Brown. The daVinci Code motherfucker. That goddamned jackoff no-talent --

Okay. Okay. I promised myself a long time ago to be moderate in my critical positions. I'm not one for the snark, you know?

But the missus made me read that goddamned book and it was just well-plotted enough to keep me hooked until the end. Oh, you should have heard me cursing and quoting and getting up to look up verification for my refutations of Dan Brown's repulsively boneheaded made-up factoid grout. It was a horrible, horrible experience and I took it very personally, so to find out that Dan Brown wrote a story so personal, so important to me... it hurt.

So I figured I'd try another.

I tried Hate Her, Hate Her, Tribulator! That's an odd one. It's a deal with the devil story where the devil is the sympathetic character and winds up destroyed by interspecies culture shock. It's an attempt to portray a supernatural character that observes the classic rules for a science fiction alien -- as John Campbell requested, something that thinks as well as a man but not like a man. It's about love, fate -- the big shit.

It was written by William Shakespeare. Fuck you, Dan Brown!

Then I tried my tribute to tiny SF worlds and got Palahniuk again. There seemed to be a lot of that going around.

Then I tried my favorite of my stories, a straightforward vision of a man in hell and how he makes the situation worse. Oh, it is nasty. Very pleasing to see that it was done by Raymond Chandler.

Steven King wrote my most recent story about a single mom pestered by raccoons. Fair enough. But then he wrote the excised acid trip party clearance scene from my novel! No way! That was supposed to be by Hunter Thompson!

I decided to try something different, an old trunk story that's probably a spoken word piece in disguise. It was by Chuck Palahniuk again, so I gave it up.

But hark! One last throw of the dice... Let's see who wrote one of the dizzying cosmic trip-in-present-tense-and-italics passages from the novel!

Holy motherfucking shit. This is too perfect. It was written by...

That is right, folks, my writing seems to rest in the Tough Guy section of the Sometimes Vaguely Literary department of Popular Fiction, but it officially runs the span from Dan Brown to James Joyce, taking in Jack London, Raymond Chandler, and William Shakespeare along the way.

From what I've read of Chuck P., he's a good plotter, terrible writer, except he can write some devastatingly funny scenes. And yes, I finished one book and couldn't finish another. Joyce, though: how many languages can you be pretentious in?

Funny, I just tried that I Write Like thing a couple days ago, and got Palahniuk and King. Those insidious craptards. However I've read Palahniuk's "Survivor" and "Lullaby" and enjoyed both.