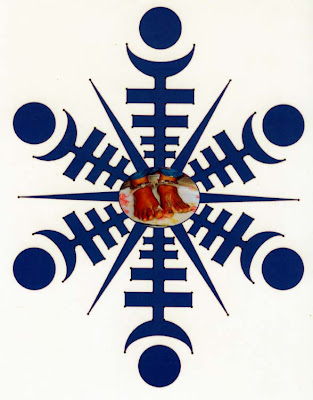 Of course it's horrible to make fun of someone's spiritual beliefs, but we've already established that I'm a horrible person. I mean, if you read this blog you have some idea of how awful it must be to live with me. The moodiness, the financial issues, the intoxication, the so-called 'zone of destruction.'

The thing to remember is that the missus can be every bit as frustrating as me. Two wrongs don't make a right, but sometimes they make parity.

Let me give you an example.

The other morning we were discussing the issue of my eyes. This will come up later, probably, but here's the basic deal -- my eyes have gotten hell of worse over the last couple of years, and my deteriorating eyesight has given me a lot of unexpected grief. An idea I had for spectacle technology a number of years back has actually come into production (you'd be amazed at the frequency with which that kind of thing happens), and it's a specific for my condition. They look amazing. So we've been discussing the possibility of my getting a pair of fucking nine-hundred dollar glasses.

So in the midst of the conversation, the missus says, "I know it's woo, but I want you to try this." And she pulls out the laminated diagram shown above. "Now put your nose to Amma's feet."

So, y'all heard of Amma? She's the huggin' guru. The good news is that her organization is not yet showing signs of being riddled with corruption, she seems like a decent enough sort so far, and she's responsible for a goodly amount of charity work.

Of course, it's important to maintain perspective. See, when I describe the missus's spirituality to a third party, I call her a serial cultist. Because she is. Here's one of our standard conversations.

The missus is on her way out the door.

The Oaf: Culting it up tonight?
The Missus: It isn't a cult.
The Oaf: Well, enjoy the dogma and charismatic leadership.
The Missus: Fuck you.

Look, Amma is pretty fucking harmless at the moment. But the missus has been involved in shit like The Miracle of Love. (Hey, cultsters! She got out when Kalindi started crapping everything up!) Honestly, I'm willing to bet that she was in the Process and the Family and she just hasn't copped to it yet.

I'm thinking when she made the switch, her decision-making process was kind of like this. "Yeah, Miracle of Love is an internationally recognized menace to decency, but they just aren't spreading plague. There's gotta be somebody spreading plague." Then she googled plague gurus, got the forms, and signed up with Amma. (Do cults have an entrance exam? I'll have to ask the missus.)

So anyway, back to my poor old eyebones. The missus hands me this card and says, "Here, put your nose to Amma's feet."

This is part of an actual graven image intended for purposes of worship, and the stuff all over her feet is probably curds or ghee.

On the other hand, it is a cult, I have no idea what they do, and this really, really, really looks like a gross jiz shot from chubbygurufeet.com. "Put your nose to Amma's feet," my ass.
And I said, "No. Not happening. No can do."

"It isn't going to happen. This will not pass."

And she glares at me. "You are so narrow-minded."

That nailed a certain dynamic in our house. Because the last idea she had regarding my eyes was that if I put pee and cod liver oil into them the lenses would become more flexible. My refusal to even give this a try was held up as evidence of my essential pessimism. "He wouldn't even try."

So that is the level of discourse. To dismiss the possibility that marination in a hellish vinaigrette of fish-0il and urine might be good for my eyes, to abstain from ophthalmological idolatry, is to be 'narrow-minded.' 'Negativistic.' 'A poopy-head.'

I don't care. I'm still not putting my nose to Amma's feet.
Posted by Sean Craven at 8:28 AM

Email ThisBlogThis!Share to TwitterShare to FacebookShare to Pinterest
Labels: culture, humor, the missus

My friend, you have some of the most interesting and bizarre conversations. I have to tune in to Aqua Teens to get that level of verbal surrealism.

And then I remembered you live in California. Ahhhh right. All is explained.

It is glorious to read your words, Sean!

And I would also not put my nose to feet. Call me closed minded!

Oh, it's easy to blame California -- but ask Barbara about the conversation I got into with the guy driving the shuttle in New Mexico, the one where he started talking about how he called in a favor to have his ex tracked by her cell phone...

If it were just California, I could move. Unfortunately, it's me.

And thanks, Peter. I'll take it on a case by case, foot by foot basis -- but for heaven's sake, I don't even know the woman.