A Child's Garden of Serial Killers 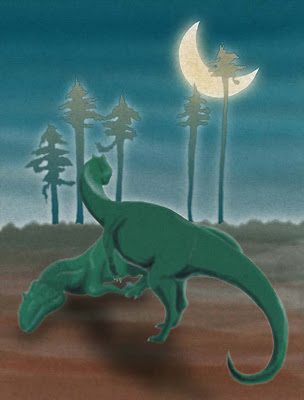 Here's the finished version of that one I put up the other day. Honestly, would it have killed me to put in a little scrub on the ground? And that shadow is just awful. Still, I dig the mood.

An E-Mail Exchange
The Oaf: I thought I'd run this by you before I posted. If I wind up writing about the girls often -- and if I don't, how will I steal all their best lines? -- I'm gonna want some pseudonyms for them.

The Sister: Go with it, and just consider them your resource to exploit.


I don't know if I've mentioned this, but I've been walking my younger niece home from school on Thursdays and Fridays, and spending some time with her and her sister before their mother comes home. On Friday we had a little conversation that pretty much tied my brain into knots, and I suspect I have a good deal more cerebral trauma ahead of me.

I'd made some passing reference to clowns that set the whole thing off.

"Once there was a clown who really, really liked cub scouts." Her voice was perfectly dreamy -- she'd slipped instinctively into once-upon-a-time mode.

And I basically crapped my pants. Where the hell did she hear about Pogo the Clown?

"He'd take care of the cub scouts and take them camping but sometimes..." And there was that sweet little smile as she strung me out just a little bit, playing up the suspense. She's still in elementary school, you know. "... sometimes he'd whisper to one of the scouts and tell him they could be special friends and he'd show them special things. And then when they were aaaaaaaaaaaaaaaaaaaaall alone the clown would do something horrible to the cub scout and then kill him."

Oh, brother. On one hand, there was part of me going into full-on panic mode. I punched the red button and screamed Your tiny niece is a serial killer freak! This has to be your fault! Lower periscope! Dive! Dive! Dive!

Then, I also had a sense of relief that she was looking at the situation with that kind of analytic thought. Behind her words was an assumption -- if a grownup offers you special things and secrets, do not motherfucking trust them. I was glad, glad, glad that she had that suspicion.

And then on the other hand, part of me was going, Fascinating. You're watching history turn into folklore right before your eyes. This is the evolution of Märchen for Motherfuckers, and this kid is a bellwether. I've been listening to some Native American folk tales that are basically all about scaring the crap out of kids so they don't kill themselves by doing stupid shit, and the kid is telling me exactly that kind of story.

And then on the other hand (my mind is a hundred-handed monstrosity), I was, more than anything else, amused in very particular way. See, it was hard to be that worried by this because, well...

"I know another story."

"There was a man? And he gave these people drugs and made them kill people. And the last lady they killed?" You cannot imagine the glee smeared out over her milk-white freckled face. "She had a baby in her stomach."

That's not how Charlie tells it. According to him, it was all those crazy sorority girls. I didn't say that out loud, though. I wasn't going to panic just because this copper-topped gamine was au fait with John Wayne Gacy and the Manson family. I needed a little more information before I could react. "So where did you hear about these guys? Was it on TV or something?"

"No, my sister likes scary stories."

And that changed everything. My social conditioning was wrong, my instincts were right. What might seem like a horrifying aberration was actually predictable, standard behavior for someone in my family. I was younger than my nieces when I was checking out books on shark attacks from the Richmond Public Library, spending hours staring at the gaping wounds caused by bites, pictures of body parts fished from stomachs, storing up fuel for the series of nightmares and hallucinations that would rock my late teens and early twenties.

So right now I'm working on a little lecture on the subject of eyebleach, of garbage in/garbage out processing in the human brain. Let the girls know that someday they're going to look at a picture they'll wish they could unsee or read a story they'll wish they could forget without setting them up to expect it. This kind of chat all too easily turns into a self-fulfilling prophecy, and I want no part of that.

Freaking out about this kind of thing does no good. I read a decent book on the subject of children's fantasy lives called Killing Monsters by Gerard Jones. He said the best thing I've heard on this subject -- it's both foolish and destructive to regard the fantasies of children as having any power in and of themselves. A fantasy is a fantasy, and it's usually best to just play along. She's a good kid with a good heart. This doesn't actually mean anything. She's just testing the edges of the human experience.

And this isn't coming from an adult feeding it to them. They're going out and finding it, the same way I was able to find photos of animal maulings, war atrocities, and sideshow freaks when I was their age. I didn't even have the internet, and my world was bursting at the seams with inappropriate information.

Let's face it. It's not a G-rated planet, and expecting smart, curious children to remain innocent is dumb. Hiding things from them is simply a way of letting them know what kind of research they want to do.

This is an aspect of liberty that is troubling and also unavoidable. To allow a child a healthy degree of freedom is to embrace risk, and well. She's one of us. A member of my family. Which means she's got a morbid sense of humor. Which means this probably is my fault.

Her birthday's coming up this week. I think I'll get her a wood chipper.
Posted by Sean Craven at 10:39 AM

And one of the sanest, most reasonable people I've ever met.

How's that for a contradiction?

I simply respond as rationally to the world as I can. I'm actually the normal one -- it's everything else in the entire universe that's weird.

When I was about five years old, I would play with the neighbor kids, in the courtyard in front of our apartment house, a complex of two duplexes facing each other. Sooner or later, one or another of the older kids would start to tease me, saying that, if I wandered off alone, the boogeyman would get me. Only, in our little gang, the kids had their own special name for the boogeyman. They called him the Zodiak. This probably seems insignificant, except for the fact that, at that time in the late
1960's, the entire Bay Area was literally being terrorized by a serial killer, who would perform some very grisly execution-style murders, and then send taunting letters to the local authorities, daring to be caught. He would also include encrypted clues to his identity, in the form of a code based on astrological signs. He was therefore christened "The Zodiak Killer." Imagine my reaction as a bright, but very impressionable and literally-minded kid, to read, each night, newspaper headlines stating that the "Zodiak Killer Strikes Again."

When the local media confirms that the most terrifying monsters of your childhood nightmares are absolutely real, the deck is seriously stacked against you...

^ Glad you mentioned Killing Monsters because it is one of the best books I got to read in my child psychology classes. Every parent should read it. It'd save kids a lot of guilt.

As an aside, and on the other hand, Bettlehelm owes me a gallon of brain bleach.

Screams, I was in that place and that time and as a child? I did not distinguish between the Zodiac killer and the Witch Woman who lived in Alverado park. Hell, you remember how Vietnam was a playground horror story?

Trish, I think that while Bettelheim may have had something interesting to say about how children use fairy tales, he didn't seem to have any understanding of their deep roots, and how their use to children isn't even of secondary importance in their consideration.

Plus, I hear they used to call hem Benno Brutalheim because he was kind of a dick to his staff.