Notes to a Fellow Writer 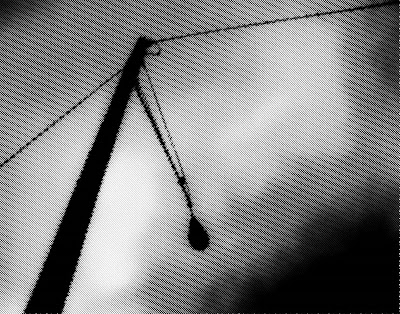 This is the first test I've made of the process I'll be using to generate the half-tones in the series of Swillistrations I've got in the works.

This uses the Phantasm plug-in for Illustrator. This is an incredible tool, and I'll no doubt be doing a more extensive review of it later. But this is so much nicer than the half-tones in Photoshop, and it's resolution independent. I can print this at any size that I want to.

Oh, this is going to be sweet.

So the cat's out of the bag. Ol' Ferrett Steinmetz has fessed up to being my correspondent here in this blog post.
(On the internet, we call that a 'link-like loop.')

Anyway, you can go out and buy a story right now that he wrote and I helped critique. It's called Under the Thumb of the Brain Patrol, and it's in the current Isaac Asimov's Science Fiction Magazine.

And for the record. I do not 'eviscerate' prose. I do not 'cut it to fucking ribbons.' For goodness' sake, it's just a little spit on the corner of a napkin and the way some people squirm you'd think it was boiling acid. Honestly.
So dude!

I have dealt out the praise and addressed the specifics of your story in personal correspondence, but as I began to write of more general matters I found myself saying things I've wanted to say to other people, so I wondered if this might not be placed in front of a wider audience. If you don't mind the internet listening in, here's some large-scale advice. Please note that I'm well aware that you're further down the professional path than I am; the arrogance of my stance is tempered by this humbling knowledge. If I over-explain anything, it's for the benefit of those peering over our shoulders.

Here's a big one. Scenes. The basic units of organization of a dramatic story are the sentence, the paragraph, and the scene. A scene is a specific action or interaction, usually but by no means always taking place in a specific location. It has the shape of a story, with a beginning, complete with inciting incident, middle, and end.

You frequently use extended passages of exposition in your stories rather than scenes. "She thought back on those lost years, when she had wandered free..." and you go on for a while. This is a technique of oral storytelling rather than dramatic fiction as it is currently written. And as it stands, those passages stand out as weak spots in your work.

If you want to make them work, you might try framing stories that use this technique as oral stories. Let the voice of the storyteller be present at the beginning to introduce the story, and when it returns later, it will be accepted. Having conventional dramatic scenes inside of a fairy-tale framework works fine.

But I think you'd be better served to learn how to think in scenes more consistently. Conventional fiction is written entirely in scenes -- even when there is exposition, it takes place inside the context of a scene. A lot of the time your exposition leaves me wondering if you're avoiding the hard work of imagining a specific event or interaction that will say what you want to say. You do this perfectly in most places -- I think you should do it everywhere, all the time. Of course, that's me.

If you want to go that way, I would suggest doing at least one draft of one story in script format. Imagine it as a film rather than fiction, and only tell us what happens through dialog and action. You can go back and add the frosting later.

(A quick aside. For years, I avoided doing writing exercises because I was writing my fiction. Big mistake on my part. It turns out that writing exercises can be really, really useful for targeting specific areas of writing that can't otherwise be reached. Kind of like a Nautilus for prose.)

Now I'm going to address a tangle of stylistic issues that I think relate to the above-mentioned issue of oral versus written storytelling. These are things I've had to fight with in my own writing, and I've seen them in a lot of other people's writing. They tend to occur together, and I think I've finally figured out what they're about.

And you will find all the mistakes I'm talking about right here in this post. This is my casual writing. Don't look to it as an example. It's fun, but it kinda sucks.

The use of fancy punctuation -- dashes; semicolons, ellipses... The use of lots of modifiers. The use of meaningless conventional phrases, such as 'and then', 'of course,' and so on. These all seem to go together, and I think I've finally figured out why. They're from oral storytelling. From speech.

The punctuation and conventional phrases act as ways of linking ideas so as to provide a continuous flow. That flow is further enhanced by the use of conventional phrases and modifiers to allow time to think. In addition, there is a music to the spoken word whose tempo and beat can be controlled by such words. These are all functional when spoken.

But on the page, ideas are linked physically, and there's no need to pause for thought. Anything that doesn't contribute is in the way. Grit in the lubrication. Every little flyspeck of a comma or unneeded 'ing' paves the path to Hell.

Try writing a draft of something without colons, semi-colons, dashes, or ellipses. None. At all.

I mean it, dude. Worked for Jersey.

And here's a little mind-blower I got from Nancy Kress. I wouldn't put it out on the blog -- guild secrets, you know -- but she swiped it from Ursula Le Guin and it's got a name and everything so I think it's out there in the public welkin already.

It's called Chastity, and it's dead simple. Write a page without using any adjectives or adverbs.

Dude, stop laughing. I mean it. No, really. None.

Dude... Oh, brother. Sorry. Should have been more gentle with that. Here's some Kleenex, buddy. It'll be okay. Just try it once. It's curiously refreshing.

And as for meaningless words and conventional phrases, hard work at revision is your best bet, but this can be aided by the use of search functions in word processing. I know that if you were to do a search on the following words --

and
so
then
but
and the phrase

and then
and then look at each instance and ask, "Does this word bring anything to the party? If I just yank that sucker out would anyone miss it?" you will find your prose hella tighter. Tex mentioned a book called The Ten-Percent Solution on self-editing that looks like it goes into that kind of thing in greater detail and I'm getting me a copy.

Of course, any stock phrases like 'of course' that you run across should get the same treatment.

I'd also suggest that you can save a lot of excess wordage by taking advantage of point of view. This story was written from the close third-person, where you write from inside the character's head. You have a habit of saying, "So-and-so thought..." We're in their POV. Nobody else is thinking. No need to specify who it is.

And for that matter, when you describe a sound? You don't need to say that she heard it, because that's how you perceive sound. If she sees it, tell us. That's interesting. Assume sounds are heard, sights are seen, sensations felt, ad nauseum.

Here's one that I do all the fucking time myself. You're describing something and you try and combine or triangulate descriptions to get greater effect -- "It was thus and such, it was this and that." It do not usually help. One clear description is best. Restatement is a form of hesitation.

And, finally, a word to the wise.

Email ThisBlogThis!Share to TwitterShare to FacebookShare to Pinterest
Labels: writing

Thanks for this, Sean. Nicely stated and with some timely reminders as I revise.

You're very welcome, Amy. I put this up here because the things I noticed in my buddy's work are things I've noticed a lot in other's work-- they seem to come standard-issue at the start.

Interestingly, my correspondent threw of the veil of anonymity and posted a link on his site. It's Ferrett Steinmetz, whose totally rocking Under the Thumb of the Brain Patrol is in the current Asimov's.

Because of this I'm getting crazy numbers of hits. Honestly, if as many people read my blog as read his? I'd be drunk with power. I'd start a fucking cult.

The Other Van Gundy said...

What makes a semicolon, em dash, or colon any fancier than a comma or period? They're just different kinds of pauses. Seems like bad advice; I wouldn't want any part of the toolbox off-limits due to perceived fanciness.

But I was intrigued by the two exercises you mentioned. I'm always on the hunt for new ways to deliberately practice writing. Have you got any more?

I came over as a friend of Ferrett's. Great piece, the advice is spot on the same I've heard repeatedly but the casualness strengthened it. The part on punctuation is one I agree strongly with but have had trouble putting into words for my friends.

Oh, please, start a cult! That would be even more entertaining than your take-down of Anonymous.