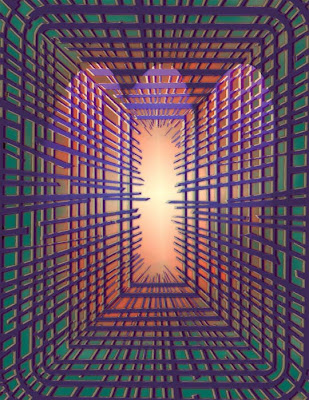 Here's one of the original images that I composited for the scratch draft cover. I'll probably recreate the whole thing in color for the next reader's draft.
Things were getting more and more awkward, more and more cumbersome. What the hell was going on? Characters from myth began showing up and just standing around, blocking the flow.

And whenever I tried outlining it just kept me from being productive. It didn't work. Nothing added up properly -- lots of individual scenes worked and they didn't go anywhere.

So I decided to take a break from writing and printed up what I'd done and passed it out to the writer's group and some pals of mine.

But the manuscript was too cumbersome. I split it in half, had the halves bound separately at the copy shop.

And while neither was an entirely complete story, the two halves each had their own distinct narrative line with a solid start and end. The second volume was weak in the middle but the first actually read like a novel.

I was writing a trilogy. God help me, a fantasy trilogy. Tolkien casts a long shadow.