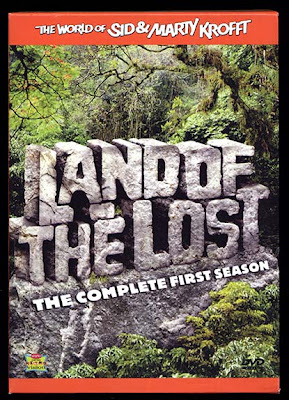 Ah, how rarely do we get to recapture the dreams of childhood!

There are a lot of people in paleo art who really should cut Mr. Paul a check... I don't steal from him in my serious pieces but can you spot him in my sketchbooks? Yes, you can.

Well, I hadn't intended to revisit another childhood memory for a while but Brian Switek's post on the upcoming Land of the Lost movie was too opportune to ignore. Let's talk about the original Land of the Lost.

See, back in the day I was a fan of the original show and I've watched it recently -- and it's worth discussing here.

When the show debuted in '74 I was a ten year-old Edgar Rice Burroughs fanatic. His Pellucidar series, set in a hollow Earth filled with a mishmash of prehistoric animals ranging from labyrinthodonts to mamoths, was my particular favorite.

(I might go into Burroughs in another post -- but I have to confess that I lost interest in his work for decades after a particular passage in Tarzan at the Earth's Core where a stegosaur gnashes its flesh-rending fangs and folds its plates into wings, using them to glide down a mountainside in order to attack Tarzan. I closed the book -- all the Frazetta-painted buttocks in the world weren't sufficient motivation to read Burroughs after that.)

Anyway, as soon as I was able to read I systematically hunted down every lost world fantasy in any library to which I had access. So when I started seeing the Saturday morning TV ads for Land of the Lost I was in heaven.

And the show did not dissapoint -- it seemed to me to be real science fiction, the characters were involving, and I was fascinated by the world they created. It was produced by Sid and Marty Croft, whose other shows like H.R. Pufnstuf and Sigmund the Sea Monster had always impressed me as kinda dorky and creepy -- but here, the creepy vibe really worked for me.

Flash forward to a year or so ago when I had been dragooned into going to Best Buy, where I spotted the first season of Land of the Lost. After a brief and pathetic tussle with economic reality and the question of whether or not this was something I needed to own I grabbed that sucker. As soon as I got home I put it on to play.

My first thought was that the effects were shockingly bad -- the rafting trip that runs through the credits is hilarious. And the overacting was pretty amusing as well. They only had a few clips of rubbery malformed dinosaurs in action which they repeated over and over.

But I kept watching. And something strange happened.

I started to enjoy it not just as camp but as adventure fiction. As science fiction. The kids started to ask for it when they came to visit. The missus started wandering away from her video poker and succulent websites when I was watching it.

This was the H.R. Pufnstuf take on The Lost World and it was, in an admittedly very limited way, good. How the hell did that happen? How did they do that?

Hey, if anyone associated with the entertainment industry is reading this, it's simple. Two words. And with these two words you can conquer any production limitations that have been placed on you and produce something entertaining and involving -- something that has a legitimate shot at success. Those two words?

I'm not talking about great writing. I'm talking about solid conventional storytelling coupled with a degree of genuine creativity. Good, professional commercial fiction. Land of the Lost had the perfect TV combination of the big overarching story and complete stories in each individual episode. Series like Lost and Heroes could benefit from the study of Land of the Lost.

And if you're a SF reader, here are some people who wrote scripts for the show. Ben Bova. Larry Niven. Theodore motherfucking Sturgeon! Of course as the story man for the first season David Gerrold deserves the lion's share of the credit for this.

(Hey, if you aren't in the know, Sturgeon at his best is one of the best short fiction writers America has produced thus far. No shit. Vonnegut fans, think of the name Kilgore Trout. Then read the name Theodore Sturgeon. Then hie thee to a bookstore or library but pronto.)

There are a few specific factors in the writing that are worth pointing out. First off, while the show had a very conventional moral center (which isn't an issue for me -- there's nothing wrong with the perrenial values of love, humanity, and self-sacrifice) it allowed its characters a degree of moral ambiguity you rarely see in storytelling addressed to children.

The characters could be short-tempered with one another. They could have moments of despair and fear. They could be unreliable allies -- and allies didn't have to be friends. And friends weren't always allies.

Also, the mythology of the show, the world it built, showed a quality of depth and imagination that was really involving. The slowly revealed nature of the technology behind this strange artificial world and the story of the mysterious lost race that built the land were actually interesting. They could easily have been used as the basis for a story for an adult audience.

There was a willingness to put the characters in real danger that I never saw in any other children's show. It had a quality of high drama that really impressed me as a child -- and that quality was still there when I watched the shows again as an adult, once I got past the cheesiness and found myself sucked into the story.

Speaking of cheesiness, the hilarious overacting I mentioned at the start of this? Turns out it's very effective. It's not the work of amateurs. It's a different style of acting and one that works in this kind of thing. More stage acting than film acting, if you know what I mean.

When the characters fight with each other, especially the two juvenile leads (Kathy Coleman and Wesley Eure, for the record), you get the sense of a real squabble. And Coleman's scream comes from the Fay Wray school -- she sounds scared and that makes things scarey.

All the actors were able to portray fear, anger, and concern in a way that brought (and brings) an unexpected emotional weight to the show.

Again, this is strictly on a pop-culture Saturday-morning level of achievement but it's still worthy of respect and appreciation -- if this is the kind of thing you like, you'll like it.
Posted by Sean Craven at 7:37 AM

Can we get a carnivorous theropod that's NOT T.rex in a popular movie? Please? Disney's CG "Dinosaur" was the only one I can think of in recent memory (that Spinosaurus in JP3 doesn't count), and it was really fantastically done.

In my movie script (I've got a finished rough draft but it's pretty rough...) the setting is Utah in the time when the Morrison formation fossils were being laid down.

The big dinosaur character is a giant Ceratosaurus. There are also Ornitholesthes, Seismosaurs, Stegosaurs, Allosaurs, and a particularly ill-tempered Camptosaur. It needs more prehistoric critters of all kinds -- although there are turtles and Goniopholis and a small arboreal mammal of currently undecided species...

When the novel is all done I'm going to give this another draft and then look for a script agent. Nothing like hubris...

A spot-on review of the original series from the adult perspective. I've seen so many commentaries from individuals who have watched the shows as adults and can only see the cheesiness and dated effects. The stories really worked. And, like you say, the acting did, too, it is stage-like and not the kind you would want to see in a prime-time drams, for example. But most children's shows do feature that type of stage acting...I think it might be helpt to sell the emotion to young viewers.

If you're interested in Land of the Lost, you might want to visit my fan site with coverage of both versions of the TV series and the latest news on the upcoming movie.
http://personal.linkline.com/enik1138/

Hey there LOTL fans! f you love this show (the original one) then you should check out these episode spoofs we made in Philly for our Krofftwerk show: