So What Am I Going To Do With My Other Site? 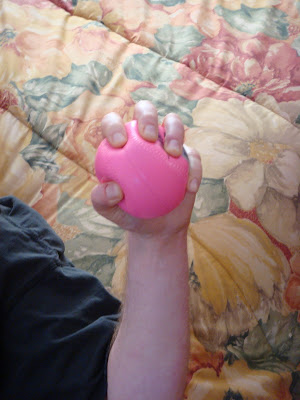 Here's the evolution of my hand/eye logo. First I started off with a sketch, for which I'm not going to look. I had trouble getting a satisfactory squeezy quality to the eyeball so I had the missus take a photograph of me squeezing one of her exercise balls to use as a reference. (Squeeze the eyeball! Squeeze the eyeball! NNNNGGGGRRRGGGHHH!)

Next I went and painted over it in Photoshop and turned it into a .gif for use on my old site. After a while I found the crudity of the execution disappointing but I still liked the image. 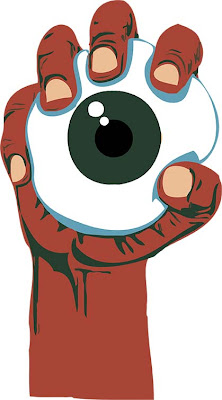 So then I retraced it in Photoshop and used the Illustrator live trace function to turn it into a vector image. It's too big, the colors vary -- at some point I'm going to do it over again as a vector image right from the start.

Still, I'm pleased with it. It works for me both as a writer and an artist. And it also calls back to some important influences -- it's got a little of Hunter S. Thompson's double-thumbed fist Gonzo logo, the Resident's dapper eyeball guys, and I recently realized that the combination of the red hand and the eye was a sort of Sauron/Saruman sandwich. Go figure.
This blog isn't my first website. Here's the first one. It's more focused on being entertaining -- but since I started my blog I've done very little to it. Time constraints, you know?

So I'm wondering what I should do with it. It's more work to post to -- I've got to do all the intertube stuff myself rather than just plug the words and pictures into Blogger. The gallery pages are a nightmare to work on. On the other hand I kinda like it. And I don't want to let go of the rights to seancraven.com.

I'm thinking that I might stick to posting stuff about the arts and my participation in them here on the blog and then using the site for the personal and humorous posts and then just put links up here.

I don't know at this point. I'm really not sure. And while I don't have a counter up there I think it garners some hits from time to time. So this morning I put a link to the blog at the top of the page and for now I'm just gonna let it go while I ponder.

But if you like the blog, go take a peek. Go on. It's got some amusement value. I promise.

Oh, and I saw a prototype for my card -- it's gonna take a few weeks before I get the real thing but the prototype looks pretty damned good. The front and back work out better than I'd hoped and the interior is better than the print I based it on. I'll turn it into a print of its own next time I'm in the lab.
Posted by Sean Craven at 2:35 PM