Not A Bad Workday 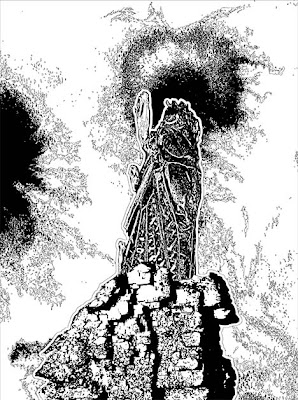 What can I say? Insects-as-phallic-architecture are fun! I think that two of these should be plenty for the magazine, though.
So that makes two good work days in a row. Yesterday I blew off working on the illustrations for Swill in order to sink my teeth back into the novel. I revised four chapters, nearly forty pages of manuscript. Now I'm a month ahead of the Tuesday night group and I'm ready to rock when the Monday night group reconvenes. So now I'm a third of the way through the fourth revision.

Today I managed to work another illustration for Swill from concept to finish. (It's the up top there.) I'm getting better and better at working my new set of tricks and it's fun to see how things develop. And now I'm down to four more illustrations before I go. One a day, oafboy. One a day. Then you can do the novel full time by the end of the week.

Speaking of which, I did the fifth revision of chapter one as well, the version that's going to be my submission to agents. I want to revise the manuscript as I get the criticisms, and hopefully it won't take me too long to get caught up.

By handling it this way I can track the novel as a whole in order to make sure that everything ties together properly and that any changes I make in any one section can be integrated with the work as a whole.

Now this first chapter has stuff in it that dates back right to the beginning of the project, back when it was a novella about a haunted garage band. I figured that it was going to be a line edit rather than a real revision.

I was wrong; there was so much red ink on the page it looked as though I'd butchered a guinea pig on the manuscript. It was great -- I hit a new level of skill in omitting needless words and started to see sentences that had been in place for years, that had gone by many readers without complaint, and I say that They Fucking Said Nothing, that they were verbal lubricant to keep my flow of ideas going while I was writing.

And that's the thing. Those words needed to be written -- they just didn't need to be read. The chapter went from nine pages to eight pages and it reads so much better now. Dense with information and yet it goes down quite easily. I'm now in the part of the ego roller-coaster where I'm thinking very highly of the novel. It's a pleasant feeling. But give me another month and I'll be hating it again...

The kid who spoke had his hands up and his friends looked freaked out. I stopped and blinked.

“Sorry, dude,” I said. “I’ve been kind of going through it lately.” I could feel my tremor starting up – my hands were shaky and there was a quiver in my voice.

Fuck those kids. Soft little overprivileged shits, all lip and no spine. They hadn’t shown me respect. They just didn’t want any trouble. I should have gone for them. Back in my hometown there’d be blood on the pavement by now, probably mine. San Costas wasn’t a city – it was a goddamned petting zoo.
Posted by Sean Craven at 5:42 PM

Red ink is such a great thing when you know what to do about it. Just wrote 9 pages of my 25 page weekend demand, just pushing plot but at a point where it had stagnated.

Looking forward to all your new goodies, haven't yet read your selection for this week and won't do it the injustice of reading it now, tis a sober daytime task.