True Amphibian Crime Part One: The Origin Of Cyclops 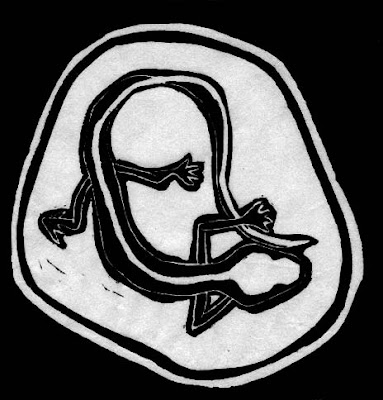 I've mentioned this before, but the missus's mother is Ruth Leaf, a master printmaker. She once spent a weekend teaching me to make linoleum cuts and I wound up producing a few that I liked before being derailed by other creative concerns. I'm planning on doing a series of them at some point in the not-to-distant future, probably on botanical subjects.

So this Tuesday I ran across something on the internet that's given me pause. It's funny how you can be just cruising along and all of a sudden you find yourself wondering how deeply involved you are in ecoterrorism. I'll provide the link at the right place in the story -- this information has made me decide to publicly confess one of my darkest criminal acts. Let us all hope no one decides it's worth prosecuting me over.

Here's the deal. I am a recovering herptile freak. When I was a child, my mother ran our house as a small-scale private menagerie, and that's how I caught the bug. For years I was obsessively devoted to collecting small animals and creating terrariums and aquariums. Amphibians and reptiles were far and away my favorites and at one point I'd managed to cover an entire wall in my room with shelves of ten-gallon tanks. Alas, when I was twelve I went on an extended trip to Oregon with my brother, leaving my finny, scaly, and slimy pals in my mother's care.

Let's just say that when I got home I didn't have a hobby anymore...

But when the missus and I got together, the disease resurfaced, malaria-style. On a whim we looked at a local store specializing in herptiles and were hooked. It started innocently enough with a pair of baby iguanas (I'll have to tell you about Isadora some time. Let's just say that when a reptile loves you, it ain't like mammal love, it's more like a sense that you're part of their territory and they own you.) but over the next few years our collection expanded to include fire-belly toads, bearded dragons, a snake, leopard geckos, axolotls, etc, etc.

So we were in and out of that place buying mice and crickets on a regular basis. One time when I was in there I noticed a truly spectacular animal for sale at a very, very low price. It was a salamander that had beautiful black-and-mustard mottling and it was more than a foot long. He was missing an eye, which was probably the reason he was on sale.

I saw him, I fell in love, I knew I didn't need another pet. So after a few weeks I broke down and bought him. But when I asked what species he was, I couldn't get an answer. The guy who sold it to me gave me an, "I'd tell you but then I'd have to kill you," type of response.

So I hit the books and the best guess I could come up with was that he was a mole salamander suffering from gigantism.

He was swell. Amphibians aren't typically what you'd call full of personality. But Cyclops was. I put him in my studio next to my drawing table and the axolotl tank. When I'd work he'd come out from under his slab of shale and prop himself up on the side of the tank closest to me and stare at me, probably hoping for a pinky mouse.

And when one of the axolotls floated at the end of the tank closest to Cyclops, Cyclops would go into a frenzy. He would writhe and make clumsy frolicking jumps and try and climb out of the tank while periodically making this strange little proto-croak. I always assumed there was some kind of sexual motivation there...

Anyway, that was about fifteen years back. On Tuesday I ran across this.

That big salamander? The one that's running amok and fucking things up for the native species? It's a dead ringer for Cyclops. A perfect match.

So now I'm wondering. Was Cyclops a hybrid? Were those hybrids introduced into the wild deliberately or accidentally? Or is the hybridization occurring spontaneously in the wild? This is all extremely circumstantial evidence, of course, but I'm wondering whether or not a fairly serious action against the local ecology has been committed, beyond the introduction of the barred tiger salamander -- and whether or not I have any responsibility in this situation. I will almost certainly just let this float by, but it's troubling.

But there are, as always, some less savory influences on my actions here. First is the deeply ingrained ethos of my ugly little youth, which taught me that snitches get stitches and dead finks don't walk too good.

And I, myself, committed a similar act when I was younger. Details tomorrow.
Posted by Sean Craven at 8:20 AM

You leave out how freaky looking axolotls are. Who wouldn't go into a frenzy?