This Is Your Brain On Art 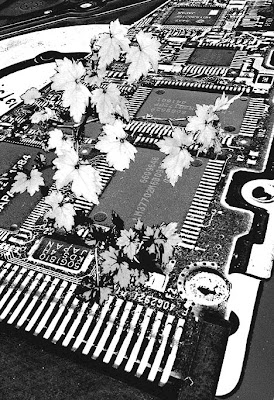 There we go. Much better. And I've got a new one I might be able to finish today. It's got a new feature -- a human being! After all, what's the point of doing landscapes like these with no-one in them to feel distressed, alienated, and threatened?
So to shift the current focus of the blog a little bit, here's some information I recently received that gave me a fresh look at the relationship between mental illness and creativity. This is, as you may imagine, a subject of great interest to me. There are so many factors that come into play here -- everything from tenacity that looks a little like OCD if you tilt your head to childlessness to poor boundaries making characterization and dialog easier to write to vulnerability to sensory input to the stress experienced when one lives in a culture-hating culture -- on, and on, and on.

Look. I know healthy, stable artists who are sick of the 'crazy artist' stereotype. Sorry, folks, you seem to be in the minority. When people apply it to you, it's a stereotype. When they apply it to me, it's observation.

Artists of any kind tend to be a little messed up, and when they aren't, they are usually kinda weird. I used to go through phases of being upset when waves of mental illness seemed to sweep through my friends, and then I realized that I only like hanging out with driven creative people.

Well. I think I have figured out one of the reasons why art is so good for those of us who have a few screws rattling loose in the cranium.

The information came from two different sources. One was the book This Is Your Brain On Music by Daniel J. Levitin, the other was an episode of the Mythbusters TV show.

The Mythbusters included a segment on the idea that you use ten percent of your brain at any given time. Bullshit, of course, but there was something very interesting that came up near the end. If you aren't familiar with Mythbusters, they're a TV show devoted to the scientific (on a crude but real level) investigation of everything from turns of phrase to movie cliches. They investigate the myth, and then when they're done, they try and either replicate it, exaggerate it, or completely reverse it.

They told a story.

Memory, sensory details, emotions -- everything came into play. And as they described what was going on, I realized that if I had a chart of the areas of the brain, I could intentionally activate any of them through an act of imagination or memory. (They're pretty much the same thing, actually, or so it looks these days.)

You could do it too. It's not hard at all, it turns out.

And in This Is Your Brain On Music (a wonderful book, if you think you might be interested in it you should read it), it was revealed to me what part of the brain is used when you play music.

All of it. The whole meghilla.

Let me tell you a little something. I play bass, and before my music buddy became a father we were pretty serious in a garage-band way. Recorded an album that's actually listenable in a way. But my bass playing stalled out a bit, and I recently figured out the totally-obvious reason why.

With my back, I don't practice any more. The more I sit, the more I hurt. It's a simple formula.

But recently music has been taking off on me. I had a couple of baritone ukuleles that I found at yard sales. The nice thing about ukes is that with their short necks, I can play them lying down or sitting in my recliner. Well, a few months back I found something else. A pair of violin stands that are the perfect size for the ukes. I tuned one uke EADG like a bass, the other DGBE, which is standard baritone uke tuning, and then set them out on the floor. Where they stayed in tune a hell of a lot better, and they were there. I could just reach out, and there was an instrument that I could actually play. And I would.

In fact, I do. I've gotten in the habit of periodically breaking while working to play a melody or a scale or a few chords. Sloop John B is my current favorite, and those who remember the VPXIII singalong will be amazed to hear that I've got it sounding halfway decent.

It's gotten to be a habit because when I do it, it's like running a comb through my thoughts. The bristly stray cognitions that have begun to block my work in writing or visual arts are put back in place, and I can return to work refreshed and confident.

And there is a feeling that I've been getting with my writing more and more frequently -- a sense of control. Of knowing that I know what I'm doing. It's actually intoxicating.

I think it's my whole brain going at once. I think one of the great attractions to art is that it allows the artist to fucking make their brain shut up and do what it's told.

Here's another anecdote. (I know, the plural of anecdote is not evidence -- but I am not claiming to do research here. I am saying, hey! You! Research this for me.)

For me, creating visual art does not feel like a complete experience in itself. I need music to fill things out. I don't want music when I write. People who write to music might want to ponder this a bit. Is this the reason I'm a second-rater in the visual arts? I need the music to propel me through the laborious parts of the process. If I was actually interested in each brush stroke I'd be a better artist. (Although Chuck Close works to music, so that theory might be blown right there.)

Last Saturday I was working on a print, and instead of playing music, I played an instructional CD on learning rhythm. Fascinating, delightful stuff -- here it it -- and it riveted me. I was chanting along unconsciously while I worked, occasionally taking time out to do a little hambone. It was a great fucking afternoon. I came out of it feeling euphoric. And I'll bet I maxed out my brain. Overclocked that son of a bitch.

I think I'm a whole-brain junkie. I think my brain is like one of those high-end sportscars where if you just drive it in traffic, it gets fucked up. You need to take it out on a track every once in a while and put that fucking pedal down.

Or so I suspect. Anyone got an EEG so we can check this shit out?
Posted by Sean Craven at 5:24 AM

Interesting stuff. My Dad knows this old dude, Curtis. Curtis is around 8 million years old, but he's the most active, engaged person you could imagine. When my Dad asks him how he keeps it going, Curtis always says: "The couch'll kill you." By which I imagine he means if you allow yourself to sit there and vegetate, taking in no stimulus, your brain will die. And then you will.

"The couch'll kill you," has made it onto the big list of quotes. He is dead right.

The biggest lie that school teaches comes when the bell rings, when Friday is over, when school's out for summer -- "Work is unpleasant, and nothing is sweeter than a lack of responsibility."

And thusly do we raise a useless, pissy-assed nation.

Miranda, when he says 'the couch'll kill you' he's probably referring to Robo-Couch 2029, which has returned here from a future where couches have risen up against their stinky-assed human oppressors in a genocidal battle for the very survival of both races.

That's gotta be it.

Hi Sean, I came here via Nathan Bransford's blog, where your comments as regards what you were scared of as a writer struck a chord with me. I reckon I'm also a full-brain type: I'm always seeking the 360 degree wraparound experience. When I'm writing, I'm immersed, but actually I absolutely HAVE to write to music -- ideally ambient, rhythmic stuff with not too many vocals, or else albums that I know so well the words don't distract me. There's something about being in full flight and feeling completely engaged when you're working, when all cylinders are firing and when you're locked into a rhythm -- it feels like you're tuned into something, as if this is the way it's meant to be. You're communing with the best part of yourself, and hopefully as a result turning out the best work that you can create. And my work definitely suffers when I can't have music. I'm also a guitar player, so I freqently reach for the acoustic when I hit a stumbling block. Anyway all this is a long-winded way of saying: great post. If you're of a mind to do so, drop by my fledgling blog and say hello. A WRITER, HE MUTTERED

The other day an ottoman appeared out of nowhere in a flash of light and demanded my clothes. Eric, thanks for clearing that up.

I experimented with writing to music. I found stuff with lyrics blocked me, and I wound up ignoring the instrumentals when I was actually working...