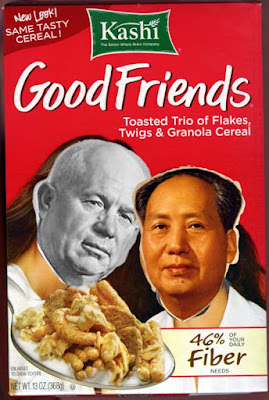 I was looking for an appropriately serpentine image in the file I keep of art jpgs for the blog when I ran across this little wonder. What the fuck do you suppose was going through my head when I put this one together?

For the record, I'm not a Marxist or even a communist. I'm a socialist, sure, but Marxism's full of Easter Bunny crap like the withering away of the state, and the Marxist obsession with the taxonomy of class makes me think of string theory -- it could well but true, but so what? (We will ignore my willful Maoist streak for the moment, as it is distasteful.)

(And now that I've had a moment or two to consider, I remember the cereal as being shockingly awful -- the box offered legitimate gastronomic competition. Perhaps my statement was that eating it was a radical act of self-criticism? And would it have been funnier with Germain Jackson instead of Tito? Political humor is so difficult.)
Normally, at this time of year I am in a state that would easily enable the missus to have me committed, should she so desire. We’re talking case-study stuff, no fooling. This year? Only two mood swings, neither lasting more than a few hours, both occurring under circumstances when both myself and the missus were in emotionally needy states for specific, defined reasons.

As initially troubling as the diagnoses I received were – for those unfamiliar with the story, PTSD, OCD, mixed-state bipolar (next time you meet a shrink tell ‘em you’ve got that one and watch the expression on their face – it’s fun if you have a cruel streak), fetal alcohol syndrome, and the suggestion that there might be some massive brain trauma that could explain everything – they’ve allowed me a basis for understanding my behaviors and misbehaviors in a constructive fashion.

As an example, my hypomania – a state of excitation similar to but milder than mania – is a byproduct of my PTSD. Post-Traumatic Stress Disorder hypersensitizes one to stress reactions. In effect, it gives you what I refer to in private conversation as a ‘crank gland,’ mimicking the effects of everything from coffee to raw meth. (Mimicking is the wrong word – it’s the exochemicals who are the big fakers.) While I’ve experimented with stimulants, they are not my drug at all. Not even coffee or chocolate. I’m much too sensitive to them. Imagine if minor upsets in temper were accompanied by a stiff line of crank, a nasty rush of volts up the spine and out to the fists – that’s a defining element in my experience of life. From time to time I get complimented on my patience and detachment – they grow out of this. I can’t need to kill twenty-four hours a fucking day, so I simply cannot give a shit about minor inconveniences. If I did? Locked up.

My hypomania is strongly seasonal. I experience it constantly during the spring and fall. I’ve always been puzzled by the fact that my SAD does not track closely to the actual seasons. This year, I realized that it tracks to the school year. The beginning and end of the school year were particularly traumatic times for me, and I suspect that my developing body simply got into the habit of going into overdrive during times when I’d have to put up with additional amounts of abuse.

This is the secret of stress reactions. When you feel both stress and a sense of control, your body makes one of the best chemical cocktails available. Top-notch. Only love is better, and not always then. Stress and no control? One of the worst, again with love as the only serious competitor.

So this year, I’ve been treating my seasonal mood disorder as a drug trip. I don’t want to waste it. And as a result, I’ve only gotten bummed out when the missus harshed my buzz.

Set and setting, as that modified dip Leary wisely stated. (It is occasionally unpleasant to have culture heroes that are a fucking pack of self-important idiots, said the self-made man of his models.) I went into this knowing what I was getting into.

I have told myself and those around me that I am in a temporarily altered state, and that there will be loud talking, bragging, vainglorious claims for the future, a rapid-fire stream of compulsive witticisms, and a mercurial temperament. Interestingly, many people seem to take a particular pleasure in my company when I’m in my incandescent mode – old friends have been reappearing, people who know me are expressing strong approval of my current state, and strangers seem to find me attractive.

I put myself into a position to take advantage of my energy. I’ve been writing and arting and musicing like a ring-tailed son-of-a-bitch, starting when I get up and ending when I see that it’s much too late. It’s been a period of peak performance. I’m doing the best work of my life currently. Feels good.

If I’m a bit snappish? If I have more insomnia than usual? If I can’t shut up about my enthusiasm of the moment? So fucking what.

One of the central negative aspects of my life has been completely reversed. Instead of this being the second-worst time of the year, it is the best. I’m shining and people like it. From now on, I’m timing my major projects to take advantage of the spring and fall.

Now all I have to do is figure out a use for the end-of-winter pit of despair. You know, that thing I get about halfway through January that lasts into April? Dysphoria, anhedonia, lethargy? “Gosh, if I had any moxie whatsoever I’d gouge my eyes out with a pair of needle-nosed pliers?” “Gee, I hope I don’t apathetically let myself die of thirst. The missus would be entirely justified in getting pissed off at me for that.” Yeah, that one.

There has to be something useful I can get out of it.
Posted by Sean Craven at 9:06 AM