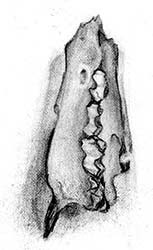 This comes from my short-lived attempt to train myself as a scientific illustrator, a goal to which I still aspire. When the novel's done I may well take science courses for a while in order to further that end, said the perpetual student.

So on Saturday I attended a writer's group led by the poet and short-fiction writer Carla Kandinsky. We've had a couple of creative writing classes together and as I previously mentioned she invited me to attend the writer's group she runs.

When I first decided to take my fiction writing seriously one thing that influenced me strongly was associated with my former editor (I wrote cartoon scripts for Mondo Media for a while around the turn of the century) Megan MacDonald. She'd recently won an award for her scriptwriting and mentioned in the linked article that the best things a wannabe writer could do were reading a lot and joining a creative community. I was a compulsive reader already -- but the latter was news to me. "You could've told me that," I thought to myself, and then hit Craigslist.

Due to an odd series of circumstances a good writer in a good writer's group found me and suggested that I should meet her group, give them some sample work, see how things fit...

Worked out well for me. I've been in the group for maybe five years now and have seen a lot of growth in my abilities. I've also seen a lot of crazy politics, made a lot of friends. Everyone who's left the group has worked or spent time with me afterward. I can't overestimate how rewarding its been.

Currently, there are three other people in the group. I don't mention the names of people who may not want to have themselves put into the public sphere but since these folks are writers I'm gonna risk it.

The first of the current crop to join was Al. He's an unpublished mystery novelist working on a series about a police homicide detective who had trained as a rabbi. Good stuff hovering on the cusp between literary fiction and police procedurals. Al's a serious, disciplined writer who is my bet for the first one of us to make the leap to a professional career. A responsible family man with a strong spiritual streak. My dad once said, "Usually I can't stand religious people but with Al I don't mind it." Which sounds a little patronizing in print -- when spoken it had a note of admiration with which I concurred.

The next to appear was Debora Kuchar. When we were looking for some fresh blood she responded and sent in a piece of surrealist science fiction that got good responses from the group.

She never showed up for a meeting -- this is not unknown.

But a while later I was exchanging critiques from noted poet Maria Chavez at Jupiter, a downtown Berkeley beer bar. While we were wrapping things up a friend of hers made an appearance. He had Deborah in tow and in the ensuing conversation we found out about our previous contact. She showed up and got hooked. She's done a lot of extremely individualistic material with a strongly surrealistic edge to it (I wish she'd figure out a venue to show some of it off) and now she's focused on her blog -- go ahead and click on her name for a taste. She's a skilled and gifted (the two are different) landscape architect and gardener and this has influenced her writing in some fascinating ways.

The group got to the point where it was just Debora and Al and myself. Then Linda came back into the picture and has been meeting with us since last July. She'd been in the group for a while before having to bow out but now she's back with both a vengeance and a novel, a thriller partially set in the LA riots set off by the Rodney King verdict.

I met Linda in Lee Marrs's scriptwriting and storyboarding class and it was one of those things where you just lay eyes on someone and you know there's something between you. Sometimes love, sometimes hate, in this case friendship. We differ in so many obvious ways it's ridiculous; at the same time we are basically two versions of the same thing.

You ever have someone whose boyfriend or girlfriend changes periodically and at the same time it seems like the same person every time? Kinda like that.

So each week we send out our submissions via email as .doc documents. Then we each print up everything the other people have sent and edit it. On Monday night we get together and go over the edits, ask for thoughts and suggestions, and in general engage in very practical and specific critiques. Since we've got three novels going it's a lot of material -- Al is the most productive and the pace he sets is a great example. He also has a fascination with the mechanical details of narrative structure that has been a real prod to my own exploration of that area of fiction writing. I'm probably the most intrusive and heavy-handed editor due to my fixation on prose style. Deborah and Linda are both great for their ability to think about physical continuity and clarity of expression -- I spend a lot of time listening to them and whacking my forehead at the things I didn't get.

Now the writer's group I attended on Saturday is the antithesis of what I'm used to. I don't have a lot to say about the membership since I'm not familiar with them -- but as group they give the impression of a certain type that's very visible here in Berkeley.

At forty-four I was the youngest person in the room, and to be honest I felt very out of place. Everyone else seemed quiet, gentle, aesthetically oriented, spiritual -- they struck me as hippy-types, to be crass about it. Nothing against the hippy, and of course it's inappropriate to label people like that without knowing them well. But I felt too big and loud and... vigorous isn't the right word but if vigorous were a pejorative term that's what I'd mean. They wrote in pens in notebooks; I wrote on a laptop. Maybe that's the best way of putting it.

Not that I didn't like them; I just felt like a pit bull in a goldfish bowl.

The way this group works is to do short writing exercises and then read them out loud. The emphasis is on expression rather than narrative. There were some lovely bits of writing produced; it was fascinating to see myself picking up on the vibe and running with it. What I did was atypical and on the precious side; I kinda dug it. I'll put it up tomorrow.

I'm going to try a few more sessions before I make up my mind. Yeah, I felt ill at ease, I'm not entirely thrilled with what I did. But it's not good to stay entirely in my comfort zone and I don't think I was grossly offensive. Fuckin' killed my back, which gives me a legitimate out if the social discomfort (please note this is my pathology, not their persons or behaviors) proves intolerable. This new kind of writing might be good for me; I've at least got a seed for a short story out of it.

Listen, if you want to write you'd probably do well to find or form a group. They get a bad rap in some circles but for me they're a necessity, plain and simple.
Posted by Sean Craven at 6:53 AM