I Flat-Out Refuse To Make A Pun About Beets 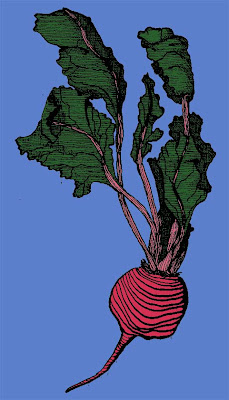 I'm not sure why so many people hate beets. Try making a salad out of julienne cooked beets and raw carrots with sweet red onion dressed in a vinaigrette seasoned with black pepper and fresh mint. Hmmm... the next time I see sour oranges in the store I'll do this and use sour orange juice instead of vinegar.
So yesterday I had my first meeting with a different writer's group. I'll blog about it next time. The rule is that I have to have at least one image with every post and I didn't have anything that would fit that post in particular. So I went grubbing around and found a motherload of old art. You'll be seeing more of it.

Anyway, this was the very first drawing that I ever colored on the computer. I was doing a lot of botanical stuff at this point and I was working a lot with technical pens so computer coloring was a natural. This was a looooong time ago.

I'd dabbled in computer graphics before but found them pretty much useless to me -- I could not work with a mouse at all... A friend at work wanted to show off his new computer so he told me to take a drawing to the copy place and have a scan made and put it on a floppy disc (anyone remember those?) and bring it over and he'd show me how to color it.

He had one of the first Wacom tablets and as soon as I started messing around in Photoshop Two or Three I knew I'd found my medium. Of course at that point I was a warehouse worker pulling down seven-fifty an hour -- but I managed to convince the missus to plonk down the bucks and let me pay her back. She got hooked as well so we split the cost of the machine. Took me a couple of years to pay it off but it was totally worth it.

When I ran across this old drawing (tracing vellum wrinkles just like people do) I decided to scan it in and recolor it. The first file is long gone and was probably at 120 dpi or something else ridiculous like that. Also, the colors came out way, way too dark.

So once I had it scanned in again I opened Photoshop and used a Levels adjustment layer to bring out the blacks and whites of the drawing, then started laying down flat colors in Darken mode in a layer on top of the scan.

I selected the color of the beet by eye and then made a seperate document with a sample of that color which I opened in Illustrator. Illustrator has some color selection functions I really like; it gave me a choice of contrasting colors from which I selected the rest of the palatte, which I tested on the document until I had a combination I liked. Then I closed out of Illustrator and opened the palatte document in Photoshop. (There is a way to transfer palattes from one Adobe program to another and I'm gonna bug my teacher about it next class.)

And there we go -- a beet which is, as my old teacher Maurie Lappe would say, "Fit for the Louvre."
Posted by Sean Craven at 7:22 AM