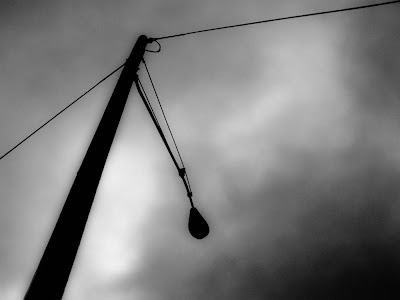 Lightroom is a lot of fun -- and I think I'm going to try using it on illustrations as well as photos.
I could easily say something here about the vanity of life, and how the only solace it offers is the sensation of one second running into the next like droplets of oil, greasing one's passage to the grave. But that's just moon talk. Let's get into something real, something earnest.

When I read this cartoon by Julia Wertz, it sneaked into my brain, where it still hides. From time to time something will remind me of this and it will make me giggle. Click here to read the cartoon. You'll want to read it in order to understand the rest of the story.

(You'll also want to check out her site a little more. Wertz has an impeccable sense of the grammar and timing of the four-panel strip. Can't help thinking that she'd have been big back in the heyday of autobiographical comics...)

So my dad Verle, his wife Lisa, my sister Charity, her two daughters Ava and Una, and I climbed in a big old rental van and drove to Oregon for my Grandma Knight's ninety-fifth birthday. I don't know what your family is like, but we're all compulsive wiseasses. Our time together mostly consists of our trying to crack each other up. Well, Charity said something that reminded me of the squitches and I laughed and she asked for an explanation.

In the enclosed environment, the meme spread rapidly. "Where my squitches at?" was the inquiry on everyone's lips. And as the visit went on and the rising tide of sleeplessness and Christianity and not being able to say the word fuck drove us crazier and crazier (our Oregon relatives are lovely people, but are considerably more conservative than our branch of the family), we started getting a little leaky, started mentioning squitches around people who would have serious difficulty parsing the concept.

Then one night Charity took Ava, Una, and myself to see a movie. (The Fantastic Mr. Fox; I have officially given myself permission to dislike the works of Wes Anderson.)

You know those moments when you're exposed to some aspect of our society, and the floor opens up underneath you and you fall spinning through the void screaming, "Our culture is over"? I get those five, six times a day. But when I go to the movies, sometimes I can get them one after another in a matter of minutes, boom boom boom, when I'm watching the ads and previews. It's a multiple orgasm of hate, and few things fill me with more hate than most media directed toward children.

After the movie, when the whole family was in the van, Charity and I tried to explain to Dad and Lisa what made these particular promos so degraded. We were in agreement that the the new Chipmunks movie was about as bad as it gets.

"The worst part was the female equivalents of the Chipmunks. They were these hairy little hoochie-mamas singing If You Like It, Put A Ring On It," Charity said. "I fucking hate that song. I want to kill it and violate its corpse."

"Yeah, they were real gross," I said. "Imagine the area of the Venn diagram where the 'furry' circle overlaps the 'prostitot' circle."

Then a drowsy voice piped up from the back seat; it was my niece Una. She said, "That's where the squitches was at."
Posted by Sean Craven at 9:54 AM

Sean! You miraculously captured the hysteria and synchronicity of a truly weird cultural moment. I also know where the Squitches are at- deep in our hearts. Your writing keeps me from dying.