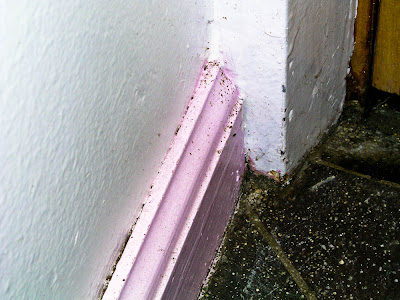 Here's a grisly little anecdote from the year I spent living with my brother and sister. We rented a mother-in-law cottage in the backyard of a blue Victorian that had been divided into apartments. One sunny spring afternoon I was sulking in my room when either Duncan or Charity (memory fails me on this point) came in.

"Hey," they said. "You got to check it out. Someone threw out a brand-new pad of paper. Good stuff."

So I reluctantly hauled my carcass out of bed and walked out to the trash cans. And sure enough, there was a brand-new eighteen-by-twenty-four pad of Strathmore Series 400 watercolor paper folded in the trash. The front of it was covered with a thick splash of something brown and glossy and lumpy. I figured it for varnish, even though the smell wasn't right. I had to wonder about the mentality of someone who'd dump a pad because the cover was stained.

My sister got the details from my mom, who got them from our landlord, who was her friend. Seems earlier that week, one of the tenants in the Victorian -- someone I'd never met -- had her boyfriend over for a little party. They'd fucked, and then she went into the bathroom and blew her brains out.

This struck me as a fairly extreme critical statement. And then something else struck me. I went to look at the watercolor pad. I looked at the 'varnish,' noted the shade of brown, the little chips and flecks, the hairs.

Then I took a good sniff. Sure enough...

And this was the beginning of the dance. I had no idea what to do with the fucking thing at that point. I mean, the paper was good. But still. My first impulse was to tear off the cover and keep the paper, but somehow throwing it in the trash seemed disrespectful. I mean, how much of a body do you have to have before you're obligated to think of it as a former person rather than just detritus? I thought about way observant Jews would gather spilled blood to be buried with the rest of the body.

Should I burn it? Throw it out? Bury it? Call the cops or a hospital for advice?

For the next few months, that pad was in full view on my worktable, fixing my mind on the subject of the woman in question, her last night, what had led her to that point. Having been suicidal myself, I found it impossible to set the question aside. Had her boyfriend been abusive? Had he somehow earned that kind of rebuke? Or was she simply a wretched person? One day I'd sympathize, the next I'd regard her with scorn, the next I'd identify with her.

I kept looking at that splash of blood. And the lumps. And flecks. And hair.

When I moved in with Karen, she made me throw it out.
Posted by Sean Craven at 7:40 AM