A Resolution, Of Sorts 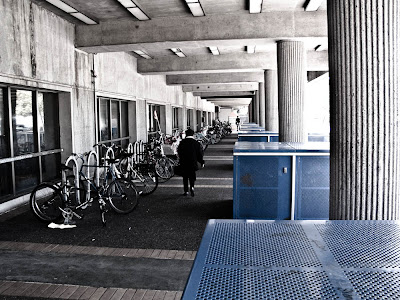 Coming from an art/illustration background, messing around with things like color and focus are more fun for me than actually taking the pictures in the first place.
So this is going to be one of those miserable self-pity posts. Not as bad as some, but still. Oh, well. Sometimes I need to use the blog as a journal, so here comes a bit of self-examination. And hey -- if I wasn't feeling better, I wouldn't be able to write this.

I've been going through an extended period of fairly serious depression, which had disguised itself by synergyzing with the interminable flu. It was a classic Trojan Horse move. And since I experience some of the more exotic varieties of depression it's tricky for me to recognize your garden-variety state of emotional paralysis. If I'm not injuring myself or terrifying passersby, it's hard for me to recognize when I'm in an unhealthy state.

And then this morning I got a genuinely sweet email from a good friend. The time and date, the reserved nature of the individual in question, and the lack of capitals make me suspect it was a beverage-related missive, though no less welcome for that. One of the things he said was this:

i think you're a really good person who cares a lot about others, and i wish to hell you could extend to yourself the feelings you extend to your friends.

In a previous post, I wrote about my experiences at the Viable Paradise writer's workshop, and how I had a breakthrough moment where I realized that I was no longer capable of hating myself. This has held true -- I don't hate myself.

But that's not exactly the attitude you want from the person who exerts the largest influence on your life, now is it? "Well, at least they don't hate me." And it's not as if the hatred stopped because I liked myself -- rather, I became incapable of maintaining the cognitive dissonance (oh, how I love that phrase) of hating myself while respecting the opinions of me that others have expressed.

In other words, great improvement but it's still far from an optimum situation. If I regard myself as my owner, or wrangler, or keeper, well. I'm awful. If I treated any other organism the way I treat myself, I would be fucking locked up. There was a point recently where I didn't eat for a few days and didn't drink for one. That was a bit of a wake-up call. H'mmm, my palate and tongue have the texture of patent leather. Whassup with that? I had a rather unpleasant image of myself as a solitary old man dying from simple lack of interest in taking care of my own needs.

Yesterday I took care of my nieces. (At their request, I made noodle cake with stir-fried pork, mushrooms, red bell pepper, water chestnuts, and broccolinni. For desert, I gave them each an advent calender with chocolates in the little windows. "By having you open one a day, your parents teach you a valuable lesson about deferred gratification," I said to Ava. "By letting you rip through the whole thing in one shot, I'm thinking that I might be able to destroy your self-control." Ava was horrified -- "I don't want you to do that!" But she ate the chocolate. What can I say? Sometimes I'm evil.)

Being around other people really made me understand just how bad I've let myself get. Between not eating and not sleeping I've managed to put myself into a grotesque state that is neither dreaming nor wakefulness, where every sensory input has a touch of the uncanny. Where the essentially hallucinatory nature of consciousness cannot be ignored. And again, this was a wake-up call.

There's part of me that thinks it's time to sit down and make a list of resolutions. Drink less, exercise more, do some volunteer work -- but that shit never works for me. I do what I do because that's what I do and a list isn't going to change that. What I need is something pervasive. Something that affects my nature, which will then affect my behavior.

I am going to try and figure out a way to change the way I regard myself. I know, lifelong ongoing project -- but I feel as though I'm now in a position to make a different type of effort along these lines. The idea of regarding oneself with affection is profoundly alien to me. When I turn it over in my head it's like a freak exercise in topology or an Escher print or something. It's like trying to imagine fucking myself. That's not how it works -- my dick points out!

But since I've received serious confirmation of my abilities as a writer and artist, I've had a new perspective. As someone who values the arts highly, I can't help but feel as though I'm now responsible for myself as an artist as much as a human being. That the oaf might actually make a legitimate contribution to the culture if I can keep him alive and working. I know this is simultaneously neurotic and hubristic, but like I said, this is an exercise in topology. I need some kind of warp in order to direct regard at myself.

Email ThisBlogThis!Share to TwitterShare to FacebookShare to Pinterest
Labels: pissing and moaning

I don't always know what to say in comment, Sean. But this is an important post and that needed to be said.

Thanks, Glendon. I feel weird about putting this stuff out in the aether sometimes, but it does serve a therapeutic purpose for me. Of course, I'll probably regret it all if I find myself in a position to get health insurance...