Best Oaf of the Year 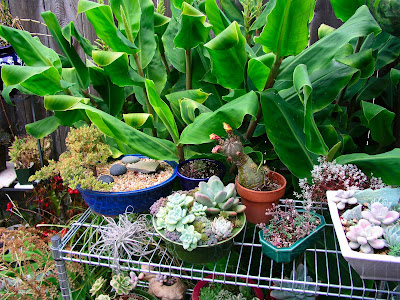 The entire yard is like this, pretty much. Living with the missus is like being in a Clarke Ashton Smith story.
So, I've got a couple of hours to kill before we head over to my sister's house -- I'm giving 'em a collection of the Palomar stories from early Love and Rockets. They're going to Bermuda with my sister's pal Cintra, and I figure this will be something the whole lot of them can read in rotation. Now, I could do something productive, but I'm in a pensive mood, and it's freaking Giftmas. So rather than just kill time, I'm gonna take a quick look back at the last year of the blog, and hunt down all the stuff that's actually worth reading.

Well, that wasn't too bad. It is a little distressing to see that the blog has so little material in it that isn't interesting if you're not into the Sean show, but hey -- seventeen casual essays in a year is not at all terrible, right? Right.

So here we go with the cavalcade of fun!

In Which I Lose Decisively

A Child's Garden of Serial Killers

Notes to a Fellow Writer

Amazon is Amoral and Complicit

Woohoo! Road Trip!
Posted by Sean Craven at 8:12 AM