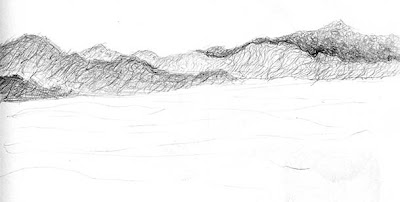 So. I have a few pieces of work to do before I set in on the main task, but the time has come to start working on the hopefully-final version of the novel. I honestly do not know if this is the ninth, tenth, or whateverth draft -- there have been so many fucking fractional drafts it's a meaningless question. The collected manuscript would only have to be dropped about five feet to kill a mule.

The thing to keep in mind is that this novel is how I learned to write. It has been my schooling. And now it's time to finish it off. I am grateful for all the assistance, advice, and criticism I've received. But it's time to stop relying on on other people's opinions.

I write one draft, aiming for three thousand words a day. Write in the morning, revise the previous day's output in the evening. Do one draft, wait three weeks, give it a once-over, send it out to two readers, one last combing, and off. Be a pro.

This shouldn't be that hard. I've written the damned thing nine or ten or eleven-point-eight-three-four times already.

So. To prepare, there are a few things I need to change in the outline.

First off, I need to track all the major incidents in the plot and make sure the lead character responds appropriately to them. Some of the high points so far are his realistic reactions to events that are taken for granted in adventure fiction; I need to make sure that happens throughout.

I need to go through and show his feelings toward himself, and how they change in specific reaction to those around him. I need to show him working and preparing as an artist throughout the book.

Right now the most dramatic, important event in the book happens in the third chapter, and neither the reader nor the protagonist have any idea what's going on. That must change -- the big event goes to the end, and when it comes, everyone knows what it is.

I need to plot the changes in the supernatural world more visibly. I hint at things in the last draft that I need to state clearly -- things which will reinforce deep thematic issues. I'm going to try and and make a serious point about materialism in a seemingly supernatural situation by using the evolution of vertebral pneumasticity in giant cattle. Essentially, each time the protagonist shows up in the supernatural world, it will be as if that world is in a different geological epoch, with the environmental changes relating to plot issues. Fun times.

And I need to make the supernatural elements completely consistent. Right now, there are still some key events that seem to happen without reason. I need to fit them in or eliminate them. Which would be a bitch, because one of them is everyone's favorite scene.

Finally, once that's all done? I'm going to do a plot breakdown of the novel, analyzing each scene for its contribution to the story and making adjustments to smooth things out.

When the time comes to actually write, there will be a few fairly major changes in approach. I'll be going from first person, past tense, to first person, present tense. I'm doing this because the story is a stream-of-consciousness piece.

Given that, there won't be chapters any more. I'll hate to say good-bye to the chapter titles, but losing the artificial breaks and cliffhanger chapter endings will be a real relief.

Rather than the speed-loaded start from the last draft, I'm going back to a plodding, stolid, "Here is the man, this is his world," approach, letting there be a nice long stretch at the start where it isn't clear whether it's really a book about a crazy person.

I get to do some prose skylarking. I get to have a miserable, fucked-up protagonist. I get to be hard to understand.

Most importantly, this gets to be flawed. This is such a strange, twisted, inadvertent piece of work that there's no way to expect it to be perfect. It wasn't planned. It grew. Like a fungus. So it is going to be organic, gnarly, and weird. Most people won't be able to read it. It might not be as bad as, say, Pynchon. It might be worse.

I just want to get this over with!

The Missus read this and she was very upset that I implied that the novel might be difficult to read -- "It's incredibly readable!" was her indignant statement on the subject. She's a big reader in the Holly Lisle/Robin Hobb/Mercedes Lackey section, so I figure the crossover potential is going to be through the roof.
Posted by Sean Craven at 3:22 PM