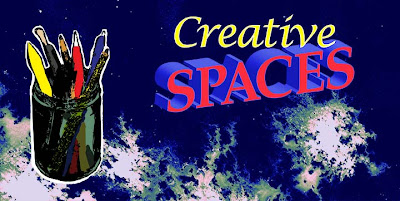 Well, we're starting to see a little Creative Spaces action! Our Overlords from the North have kicked in -- check out Glendon Mellow's Swiss Army Knife of a closet and Peter Bond's new monitor!

Glendon suggested that I do a meme-style shout-out to those who I want to participate. I thought that was swell. Then I realized that I've already sent out emails to everyone who I knew who had a blog and seemed likely to participate. Okay, Homework Club and Art Evolved! Get of your butts and show us the goods!

So today there's even more of my studio. I could actually keep going like this for an indefinite period. Now, I read the Velveteen Rabbit when I was a kid. It made me cry and taught me a valuable lesson. Inanimate objects are just like people -- they will break your fucking heart if you give them half a chance. So I try and avoid anthropomorphizing objects. But that's kind of tricky when those objects have faces. Here are some of the wacky cast of characters keeping me company here in the studio. 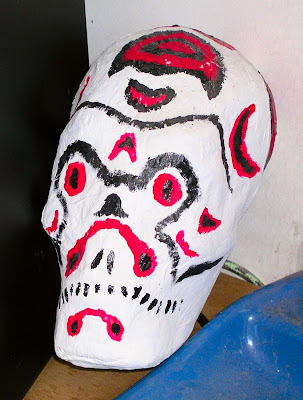 I did this at a Day of the Dead party at my sister's place. There were a bunch of blank skulls and everyone got to paint there own. It's very slightly a self-portrait -- I get that look on my face all the time. 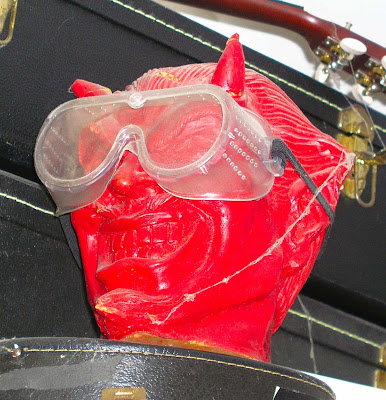 This is the synthesist and electronic percussionist for the band. You know his name; when he works with us he goes by Quarter-Inch Jack. Why is he wearing safety goggles? Because that's how hard we fucking rock.

(Anyone know anything about putting MP3s into a blog post?) 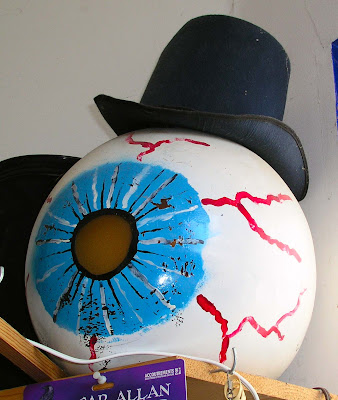 Time to blow another legend out of the water. Back in the day I heard Deadheads claim that the Residents were Deadheads and would even show up at Dead shows in costume.

Tell you what -- my suspicion is that there are a bunch of Deadheads who like the Residents, but not a lot of Residents enthusiasts who go for a nice twelve-hour Dark Star jam.

When I began my association with my band pal, I found out that there was a kernel of truth to the story. Prick up your ears and attend, my friends.

One year in high school, the Hon. Richard Talleywhacker, guitarist and gentleman, decided that he would dress as one of the Residents for Halloween. He found the experience salutary, and felt that Halloween wasn't enough scope for an outfit that was radioactive with cool.

We all have our objectionable characteristics. I myself am an unpresentable monstrosity. Well, Mr. Talleywhacker was -- and quite possibly is -- a Deadhead.

So he started wearing his Residents outfit to the occasional Dead show, and the legend grew from there. 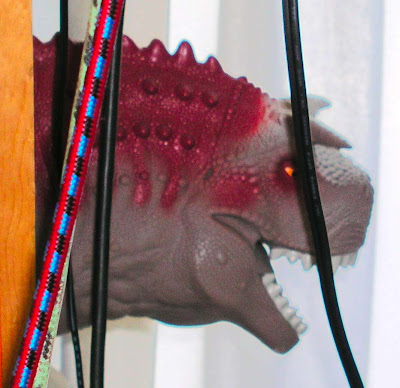 Traumador, if you see this I want you to know that there's a perfectly reasonable explanation for my possession of a severed Carnotaurus head. It was self-defense and some other dude did it anyway.
Posted by Sean Craven at 4:10 PM

no worries... we're not that closely related as far as theropods go...

that and i think he owed me five bucks :P

In that case, I've got a riddle for you.
Q: What's the difference between Carnotaurs and carnitas?
A: A machete, a crockpot, and about three hours.

The thing about the big theropods is that they're all dark meat.