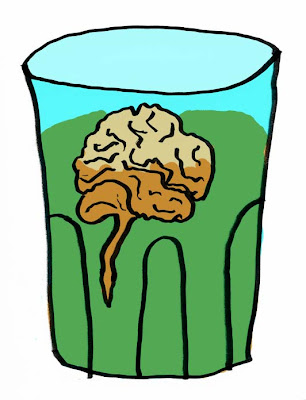 Here's another one of those dreadful little anecdotes that makes me look like a thoroughly horrible person. When it slipped out last night at Homework Club, I was told in no uncertain terms that I had to make a blog post out of it. Well, I'm done early with my editing for the day (another forty pages off to the Monday night group), so what the hey. It's not like my reputation consists of anything but tarnish.

Quite a few years back, the missus took an online IQ test. Well, since she did it, I had to do it too. But it was time-sensitive and toward the end I had to get up and pull the hounds off the UPS guy, which screwed me up so badly I only scored a 158. Man, I was moping about that one for weeks afterward.

(You would not believe the ridiculous horseshit I mope about... I am a sulky fellow.)

Anyway. While I was moping a thought started growing in my enormous brain. A bad and wrong thought.

It wouldn't leave me alone. I had to do it.

I waited until the missus was out of town so as to avoid having to deal with her being all judgmental about the fact that I'm a fucking self-destructive idiot. I found a good, solid, reputable on-line IQ test affiliated with a major university. And I set two conditions for myself.

First off, I wasn't going to allow myself the luxury of thought. If I had to devote any effort to answering a question whatsoever, I'd either guess or skip it.

My breakfast on that day consisted of two twenty-two ounce bottles of Maximus IPA and a half-pint of Wild Turkey 101. This was somewhere in the neighborhood of twice as much booze as I'd normally down. I wasn't going for a buzz -- I wanted to take this test hammered.

So once I hit the appropriate blood alcohol level, I sat down and ripped through that test. Got to say, it was a blast. If a question gave me any sense of doubt? Made me feel as if I wasn't smart enough?

Well, I wasn't smart enough and I didn't give a shit. Fuck you, IQ! Next question!

When I was done, I hit the button and got my results. And they were chilling.

By strictly adhering to a game plan of drunk and lazy, I scored an IQ of 98.

This is the average American IQ!

That, I said to myself, explains everything.
Posted by Sean Craven at 3:16 PM

LOL love the punchline. Sadly it does explain so much about why the world is the way it is, doesn't it?

Sir! That is my proud nation to which you refer! America...

Fuck it. Can't keep it up. We are a disgrace, are we not? America isn't really civilized; in a lot of ways, it's just the world's most expensive third-world nation.

Or maybe I'm just cranky because my family has been here for four hundred years and we're still broke.