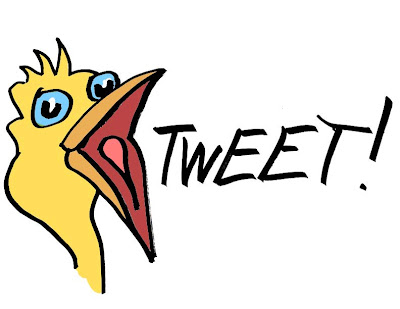 You should go check out Craig Dylke's Creative Spaces post. It's got gratuitous New Zealand!
I've been Twittering as seancraven for a while now. It started off when Thaumatrope showed up. I couldn't resist the challenge of a 140-character story, especially if it had the added difficulty of being SF/Fantasy/Horror.

At first it was just a matter of my spouting off into the void but I began to gather a few followers. I only know where a few of them come from... Most of 'em just showed up out of the blue. I have no idea how they found me.

As confused as I am by Twitter, it's grown on me, especially now that I have a few pals and there's a bit of give-and-take. It provides a good outlet for brief wise-ass remarks -- and more importantly, my prose has been improved by my work in such a concise format. Just for fun, here are my favorite early Tweets.

I picked up the latest Kick Ass today. Why aren't there more comic books about idiots in leotards beating the holy crap out of each other?

Sometimes these things come out of my mouth... "How do girls get to be such sissies? You've given birth! Nothing should appall you again!"

The missus picked up an electric anti-bark collar for the terrier. It's not going to work; I tried it and it just made me cuss more.

I just realized something. They were hooty and they blew and they were called Hootie and the Blowfish. That's actually kind of admirable.

Just invented my first mixed drink; the shallots make it kind of crunchy. I think I'm missing the point...

The optimist sees the glass as half-full, the pessimist sees it as half-empty. I hate glasses.

Oh my darling, oh my love, must you like The Breakfast Club? They have pills for that these days.

Overheard - some hippies on hearing B.B. King for the first time. "Man, this guy is good. He'd be great if he had a more positive message."

These words just ushered me into the singularity. "Invite Mail Delivery Subsystem to chat."

When I saw the Netflix envelope on the counter I had to take a peek. What do they watch? It was Norbit. Oh, god, I feel so dirty.

Best line from the writer's group: "About a third of the people with that mental illness kill themselves." "So the rest become writers?"

Only a pretentious jackal would make a cocktail with Laphroaig. I shall drown them in an artisanal orgeat syrup and garnish with mint.

When the cat's away, the mice will commit criminal acts of such magnitude as to render the concept of punishment meaningless.

I am a man of the arts and letters, not to be called poor white trash. The term you're looking for is impoverished Caucasian refuse.

Whenever I work in pencil these days I get anxious after I've worked for a while. Because it's been too long since I've saved my work.

You ever get the feeling that human beings start out as sexually-transmitted tumors and then go downhill from there?

I need a new outfit. Clothes say something about a person and mine say, "Don't cross the street unless an adult is holding your hand."

I have purchased black slacks, a tweedish sports-coat, a white shirt, and a tie. The overall effect? Lancelot Link, Secret Chimp.

Last night, in reference to me: John - "How did you know he played bass?" Danny - "Just look at him!"

To gracefully endure altruism can be an act of genuine and necessary charity. God damn it.

Shakespeare had his seven ages of man. I am a simple fellow and three will suffice for me: Yoot, brute, and coot.

I sold out! I sold out! It turns out that my soul is worth what is best described as just barely three figures.

The missus is enraged by ties and Herb Alpert. I bet that if I start exploring my inner square I could really get on her nerves.

Water skiing: I will never again use a device powered by internal combustion to give myself a public enema unless I get tips.

Why does my giant lubber grasshopper smell like very old soy sauce? Should I lick it to see if it's salty?

Non-threatening sexlessness in a musician is kinda like those mantises that look like orchids.
Posted by Sean Craven at 10:39 AM

Email ThisBlogThis!Share to TwitterShare to FacebookShare to Pinterest
Labels: humor